Skip to content
The Japanese Bobtail has an unusual ‘bobbed’ tail more closely resembling the tail of a rabbit than that of an ordinary feline. The short tail is a cat body type genetic mutation caused by the expression of a recessive gene (or so it says here :yes:). Thus, so long as both parents are bobtails, all kittens born to a litter will have bobtails as well. Unlike the Manx and other cat breeds, where genetic disorders are common to tailless or stumpy-tails, no such problem exists with the Japanese Bobtail. The Japanese Bobtail is a small domestic cat native to Japan and Southeast Asia, though it is now found throughout the world. The breed has been known in Japan for centuries, and there are many stories, as well as pieces of ancient art, featuring it. 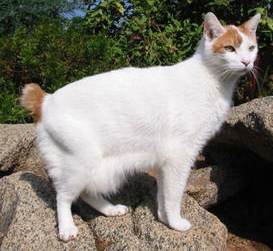 Japanese Bobtail – Thought to be originally from China!
Japanese bobtails may have almost any color, but “Mi-ke” (三毛, mike?, literally “three fur”, and composed of red, black, and white coloring) or bi-colors are especially favoured by the Japanese. Much like any other breed, the colors may be arranged in any number of patterns, with van and calico being common among purebred cats, though other colorations are also accepted. [teaserbreak] History The earliest written evidence of cats in Japan indicates that they arrived from China or Korea at least 1,000 years ago. In 1602, Japanese authorities decreed that all cats should be set free to help deal with rodents threatening the silk-worms. Buying or selling cats was illegal, and from then on, bobtailed cats lived on farms and in the streets. Japanese Bobtails thus became the “street cats” of Japan. The Japanese Bobtail is mentioned in Kaempfer’s Japan. First published in London in 1701/02, it is the first book written by a Westerner about the flora, fauna, and landscape of Japan. Engelbert Kaempfer, a German doctor, wrote: “there is only one breed of cat that is kept. It has large patches of yellow, black and white fur; its short tail looks like it has been bent and broken. It has no mind to hunt for rats and mice but just wants to be carried and stroked by women.” The maneki-neko (“beckoning cat”), a Japanese Bobtail seated with one paw raised, is considered a good-luck charm. A maneki-neko statue is often found in the front of stores or homes. In 1968 the late Elizabeth Freret imported the first three Japanese Bobtails to the United States from Japan. Japanese Bobtails were accepted for Championship status in CFA (Cat Fanciers Association) in 1976. Legend There is a legend in Japan about why the Japanese Bobtail lost its tail. It states that a cat was warming itself too close to a fire, and set its tail on fire. It then ran through the town, burning many buildings to the ground. As punishment, the Emperor decreed that all cats should have their tails cut off. Bobtails could have also surged after the legend of the bakeneko, or nekomata, a cat that when its tail grew too much, became a double-tail, and the cat would get powers like talking, walking on its back legs, and shapeshifting. The nekomata could cause massive disturbances and even resurrect dead people. Japanese people may have started cutting their cat’s tails to avoid them to become bakeneko. Breed Standard Head: The head should form an equilateral triangle. (Not including ears) Ears: Large, upright, set wide apart but at right angles to the head and looking as if alert. Muzzle: Fairly broad and round neither pointed nor blunt. Eyes: Large, oval rather than round. They should not bulge out beyond the cheekbone or the forehead. Body: Medium in size, males larger than females. Long torso, lean and elegant, showing well developed muscular strength. Also balance is very very important. Neck: Not too long and not too short, in proportion to the length of the body. Legs: Long, slender, and high. The hind legs longer than the forelegs. Paws: Oval. Toes: five in front and four behind. Coat (Shorthair): Medium length, soft and silk. Coat (Longhair): Length medium-long to long, texture soft and silky gradually lengthening toward the rump. Tail: The tail must be clearly visible and is made up of one or more curves. The Japanese Bobtail is a recognised breed by all major registering bodies: CFA, TICA, FIFe; Shorthair only with the exception of GCCF (UK). Japanese Bobtails usually have litters of three to four kittens with newborns that are unusually large compared to other breeds. They are active earlier, and walk earlier. Affectionate and generally sweet-tempered, they enjoy supervising household chores and baby-sitting. They are active, intelligent, talkative cats with a well-defined sense of family life. Their soft voices are capable of nearly a whole scale of tones; some people say they sing. Since they adore human companionship they almost always speak when spoken to, and sometimes carry on “conversations” with their owners. Because of their human-oriented personality they are easy to teach tricks and enjoy learning things like walking on a harness and lead, and playing fetch. A similar breed of cat is in development in the United States as breeders attempt to perfect the “American Bobtail Cat” that would have a tail half the length of other breeds, though there has not been definitive progress in getting a new breed recognized yet. Eye Discolouration (Ocular heterochromia) While rare, Japanese Bobtails, especially predominantly white specimens, are more likely than other breeds to express heterochromia, or differing iris colors. One eye will be blue while the other is yellow (though in Japan, blue is referred to as silver while yellow is referred to as gold). This trait is popular and kittens displaying this “odd-eye” feature are usually more expensive. Information From Wikipedia.
This ancient, rare breed was originally found in Japan and throughout most of southeast Asia. It is not a native breed in Java nor Indonesia. Genetically they are part of the long-haired Oriental genus. The term “Javanese cat” was coined by a Helen Smith of ‘MerryMews’ Cattery in the 1950’s. The name is derived from the tradition of using the names of the countries and islands of south-east Asia for Oriental cat breeds. Javanese have a long, silky coat, that comes in a variety of colors. These cats are ranked among the most intelligent and affectionate breeds of cat. It is said they require companionship and stimulation to remain healthy. 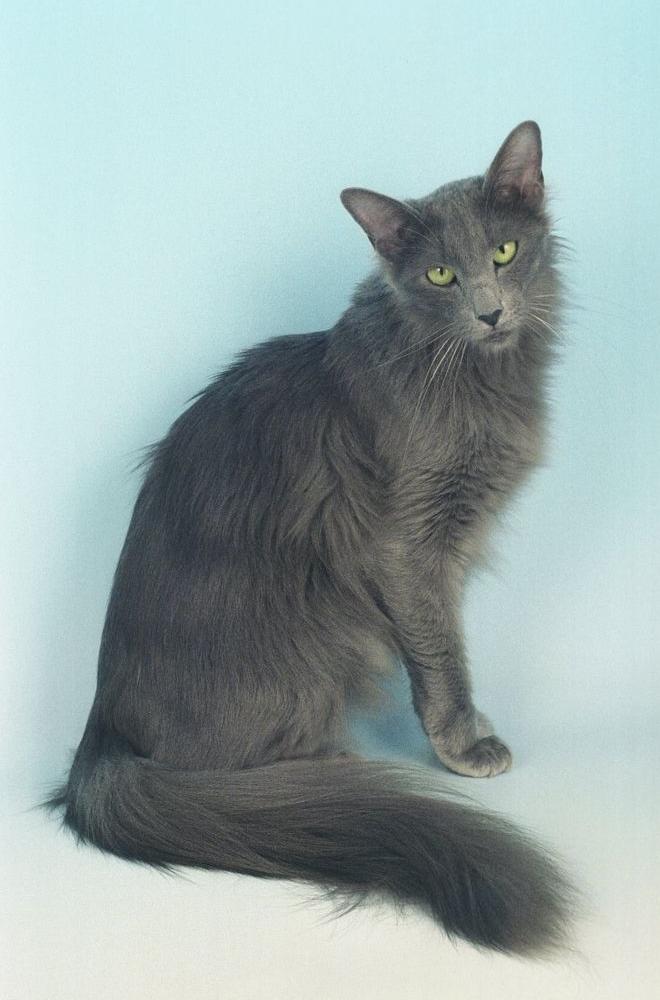 A Javanese showing her unique tail

These long, lanky cats have very sleek and powerful legs that make them very adept at running and leaping. They are generally very playful pets but they do however have a tendency to become overweight if they do not receive adequate exercise. Javanese are also quite vocal, and most will “talk” for no particular reason. 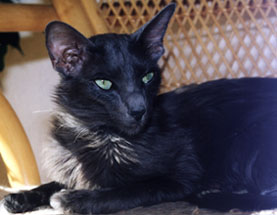 Javanese – Are elegant and intelligent cats

Javanese have a unique tail which is made up of extremely furry strands. The Javanese has a distinctive oriental look that is given by high cheekbones and slightly almond-shaped eyes. This exquisite cat comes in a rainbow of colors and coat patterns in both long-haired and short-haired varieties. Javanese cats are referred to by show cat fanciers as colourpoint cats: showing odd or “rare” colors; such as red or white, or patternation; tabby and tortie. As with many show cats the Javanese has common genetic defects (and are shared with the “Balinese Cat” and the “Siamese Cat”). These include: deafness, joint issues, early-onset arthritis, hip displacement and cross-eye.