Skip to content
The first Snowshoes appeared in the 1960s in the United States as a result of cross-breeding between a Siamese and a bi-colored American Shorthair producing a sturdy, pointed cat with white markings on the face, chest and feet. The Snowshoe is a relatively small cat with a lean and muscular stature. Th ACFA standard for this cat breed states that it gives the appearance of great power and agility, yet has the look of a runner rather than a weight lifter. 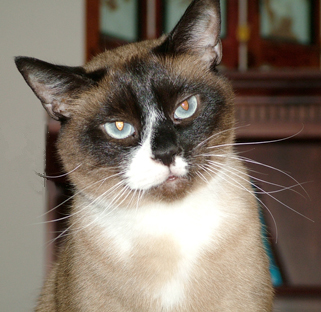 Snowshoe – Playful and Intelligent animals
The ears are large and triangular. The head will also be triangular and usually has black markings. In purebreds, the eyes are always blue. Coat is short-haired, and is white and gray. The tail is medium-sized. Snowshoe cats come in blue, lilac, lynx, fawn, chocolate, and seal points. Snowshoe are generally sweet tempered, energetic, playful, intelligent, and adaptable. They are a very social breed that requires more attention than most cats do, and consequently cannot be left alone for long periods of time. In a typical household they will be friendly to everyone, but will usually devote themselves almost entirely to one person. Snowshoe kittens are all born white. Their colors and markings become visible within 1-3 weeks after being born. The pattern on each of these cats are different for each Snowshoe. No two Snowshoes are alike. The Snowshoe is considered to be a rare breed