Skip to content
The Turkish Van (Turkish: Van Kedisi, Armenian: Վանա կատու) is a rare, naturally occurring breed of cat from the Lake Van region of present-day Turkey. For Turkish Vans, the word van refers to their color pattern, where the color is restricted to the head and the tail, and the rest of the cat is white. It is the maximum expression of the piebald white spotting gene that makes the van pattern. The spotting gene appears in many different species (like the horse and ball python). It also shows up in the common house cat, so a cat that shows this color pattern but is not registered or from the Van region, is called a “Vanalike”. 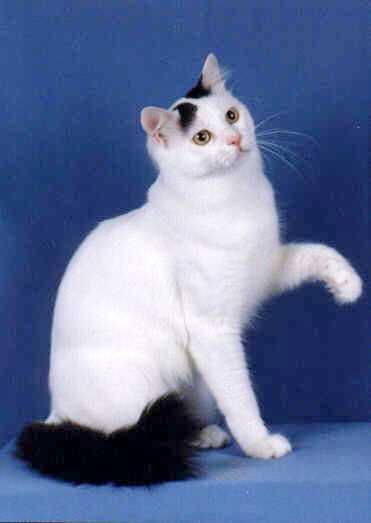 Turkish Van – The swimming Moggy
Characteristics The coat on a Van is considered semi-longhaired. While many cats have three distinct hair types in their coat – guard hairs, awn hairs and down hairs – the Turkish Van only has one. This makes their coat feel like cashmere or rabbit fur, and the coat dries quickly when wet. Lake Van is a region of temperature extremes and the cats have evolved a coat that grows thick in the winter with a large ruff and bottlebrush tail for the harsh winters and then sheds out short in the body for the warm summers. The full tail is kept year round. The Van is one of the larger cat breeds. The males can reach 20 lb (9 kg) and the females weigh about half of that. They have massive paws and rippling hard muscle structure which allows them to be very strong jumpers. Vans can easily hit the top of a refrigerator from a cold start on the floor. They are slow to mature and this process can take 3-5 years. Also, their fetching skills are quite good and they are quick to learn. Perhaps the most interesting trait of the breed is its fascination with water; most cat breeds dislike being immersed in water. The unusual trait may be due to the breed’s proximity to Lake Van in their native country; it may have acquired this trait due to the very hot summers and have extremely waterproof coats that make bathing them a challenge. As such, Vans have been nicknamed the “Swimming Cats” for this most unusual trait. Most Vans in the United States are indoor cats and do not have access to large bodies of water, but their love and curiosity of water stays with them. Instead of swimming they stir their water bowls and invent fishing games in the toilet. Breed standards Breed standards allow for one or more body spots as long as there is no more than 20% color and the cat does not give the appearance of a bi-color. Although red tabby and white is the classic van color, the color on a van’s head and tail can be one of the following: Red, Cream, Black, Blue, Red Tabby, Cream Tabby, Brown Tabby, Blue Tabby, Tortoiseshell, Dilute Tortoiseshell (also known as blue-cream), Brown Patched Tabby, Blue patched Tabby and any other color not showing evidence of hybridization with the pointed cats (Siamese, Himalayan, etc).