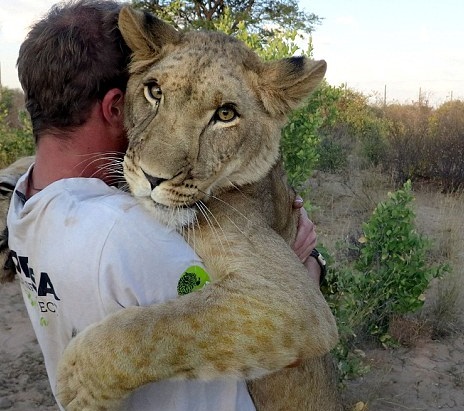 Sirga is one hefty Cat.
Photograph: Caters News Agency
Sirga the lioness was abandoned by her pride as a young cub and left to fend for herself in the wide wild African bush.It was extremely lucky for the animal that she was rescued by the owners of the nearby Modisa wildlife sanctuary in Botswana, Africa. Today Sirga is a fully grown feline weighing in at over 110 pounds. She’s a beautiful brute of a lioness in fact. 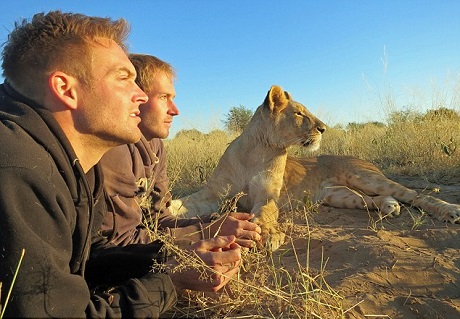 Sirga with her two rescuers, Valentin and Mikkel
Photograph: Caters News Agency
By rescuing and looking after this cat, the owner of the sanctuary Valentin Gruener has forged an unbreakable bond with Sirga. Both Valentin and his fellow naturalist Mikkel Legarth are treated like fellow lions by Sirga. In return, the men help the Big cat to hunt for food and they get to receive the hugs of this most affectionate feline.Mikkel, explains: “The pride had three cubs and two were killed before Sirga was abandoned without food. It happened on our land and we couldn’t standby and watch her die.”“We didn’t want Sirga to become like other lions in captivity, constantly fed by streams of tourists. ”“She only interacts with me and Valentin. “She hunts her own food, taking antelopes and she will let us be near her when she eats it which is remarkable.“Sirga doesn’t mind people, but she doesn’t pay them any attention. Wild lions are scared of people, the problem comes if you release a lion that is used to people in the wild, that can cause problems.”“With Sirga we want to release her to the wild eventually as a wild lion not as one that has met lots of people. That would be dangerous.”

Sirga as a cub
Photograph: Caters News Agency
Valentin and Mikkel are conservationists who live in the real hope of saving the lion population in the Botswana vicinity but as is the case in so many animal environments today, increased farming activity is bringing lions and man into more and more conflict.The men have begun the Modisa Wildlife Project to work with local farmers to find a way to keep lions and man in their respective domains, so that they can live together in mutual harmony. The plan is to relocate the lions which are coming into contact with farmers to one large protected area where they have enough wild prey to feed on.Mikkel continues “If you release wild lions somewhere else, they will come straight back to where they were before because there is food there. “And if you just dump a pride of lions in the middle of a new territory they will disturb the prides that are already there. “In Botswana all lions are protected by the government. They are like swans being the property of the Crown in the UK. This also makes moving them a problem.“What we have now are 10,000-hectare plots with 10 to 15 lions in fenced enclosure, they are wild lions but we do have to feed them. “The first time you walk up to a lion all your body is telling you this is not something you should be doing.”