The rusty-spotted cat (Prionailurus rubiginosus) is the smallest member of the wild cat family. It has been called ‘hummingbird of the cats’, due to its small size and sprightly actions. As far as wild cats go, the smallest rival (the Black-footed cat) measures in at 1.7cms larger than this tiny feline, which is just 48cms from snout to tail. Even the largest example of this small predator has weighed at no more than 1.6 kg (however these cats are extremely rare in the wild – they are seldom seen and it’s been reported that they have only been photographed 7 times in their natural habitat). 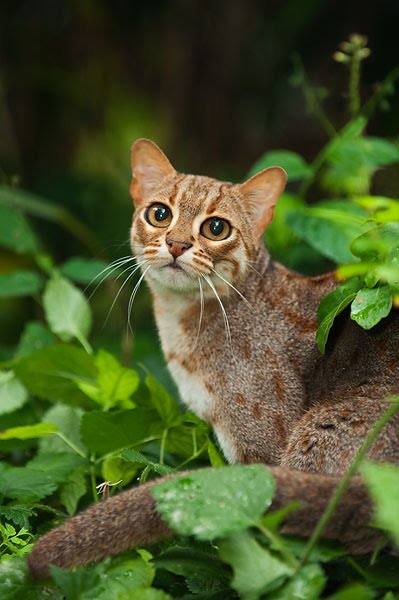 Hummingbird of Cats
Photograph: unknown
The rusty-spotted cat is nocturnal and partly arboreal (living as it does for much of its time in trees), spending the day sleeping in dense cover or sheltered places such as in hollow logs or undergrowth. It feeds mainly on rodents and birds, but may also stalk and catch lizards, insects and frogs. Frogs are a particular favourite food after heavy rainfall flushes them out into the open. These felines hunt primarily on the ground, making rapid, darting movements to catch their prey; they apparently venture into the trees primarily to escape larger predators rather than when foraging for food. As with other cats, they mark the boundaries of their territories by scent spraying (with urine).After mating, the female rusty-spotted cat will prepare for birth by occupying a den in a secluded location. The kittens with grow during a 65-70 day gestation and when born (typically in April) the one or two kittens may weigh as little as 60 to 77 g (2.1 to 2.7 ounces), and are marked with rows of black spots. Such cats will reach a breeding age at around 68 weeks, by which time they will have developed the distinctive adult coat pattern of rusty blotches. 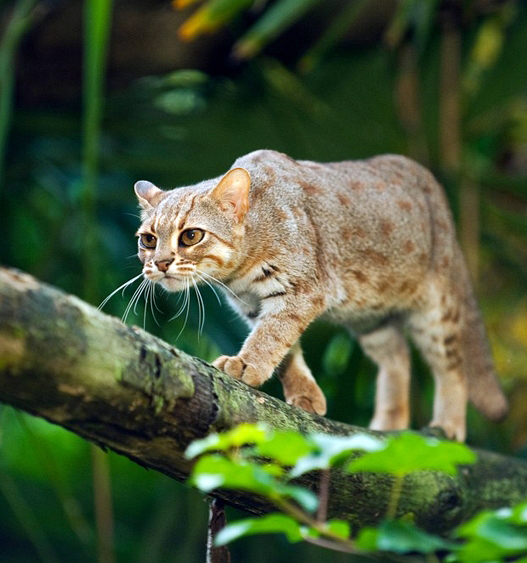 Rusty Spotted Cats are agile and fond of climbing
Photograph: unknown
It has been recorded that rusty-spotted cats have lived for twelve years in captivity, but their lifespan in the wild is unknown. They are known to be nocturnal in their habits (content to rest in shady bowers during the day) – but once again very little is known of their habits. One fact that is known for certain is that in the wild, they are frequently observed in trees. Experts on such matters have confirmed that they are indeed ‘above-average’ climbers.The appearance of the rusty-spotted feline is sleek and lithe. It is (like many cats) highly focussed when stalking its prey. The coat is a short, soft fawn-grey with a rufous tinge of varying intensity, patterned with lines of small rusty-brown spots which form solid stripes along the back of the head. The tail, which averages about 50% of head-body length, is faintly marked with dark rings [Pocock] The underside and insides of the limbs are grey to white with large dark spots. Dark streaks have also been observed below their eyes and across their jowls.Rusty-spotted cats inhabit Southern India and Sri Lanka but they are limited in their habitat, preferring moist and dry deciduous forests (with dense vegetation and rocky outcrops) in Sri Lanka as well as scrub and grassland in India. They are often found around waterways and human settlements.

Portrait of a rusty-spotted cat
Photograph: Terry Whittaker
Today, the main threat to the rusty-spotted cat is that of habitat loss mainly due to deforestation, although trade in furs is an ever present risk in parts of its range. Other threats are the the further loss of habitat because of the spread of cultivation. They are also at risk of hybridisation with domestic cats across its range.Rusty-spotted cats are listed as Data Deficient by the IUCN. The Indian population is on CITES: Appendix I and the Sri Lankan population is listed on CITES: Appendix II.References:https://en.wikipedia.org/wiki/Rusty-spotted_cathttps://www.catsg.org/catsgportal/cat-website/catfolk/rubig01.htm [Pocock]