The Foldex cat breed was established by cross breeding both Exotic Shorthair and Exotic Longhair breeds with the Scottish Fold breed – it’s distinguishing feature (which characterises the Foldex breed) is a highly rounded, gathered and folded pair of ears.

The Foldex breed first appeared around 1992 in Quebec, Canada as an experimental breed. This cross breeding resulted is a new Persian type breed with folded ears. This animal made its first appearance in a show hall in 1993, being presented by Betty Ann Yaxley. On viewing and admiring this new feline Jeanne Barrette dedicated herself to work with this animal well into the future. Consequently the Foldex breed was accepted as an ‘Experimental Breed’ in November of 1998 and in August of 2006 it was accepted as a New Breed for championship (cat show) status. However it is only recognised by the Canadian Cat Association (CCA).

The Foldex breed has a shorter nose than the Scottish Fold breed. Their body type is sturdy and muscular with good bone structure, a stubby neck, round eyes and a round head that give the breed a very owl like appearance. The folded ears further make the cat a little like a small ‘teddy bear’. Fully grown the weight of this cat is around five to eight pounds. Coats are dense and soft to the touch and can be long or short. The Foldex breed comes in a large variety of colours and patterns.

If allowed to breed these folded ear cats must be crossed with a straight ear cat. This must be done to avoid the potential skeletal defects associated with the breed. Suprisingly, all Foldex breed kittens are born with straight ears. At three to four weeks the ears begin to start to bend and then fold on many of these kittens. Many vets recommend that ears will require special cleaning care to prevent infections such as might living in the ear canal.

These felines are highly intelligent, inquisitive (of course), loving and noble cats. The make good house cats as they have a calm and docile temperament (close to that of the Exotic). While they are mostly quiet they often do like to get envolved with what’s going on in the house. The also like to play and interact with us humans when thye are in the mood. 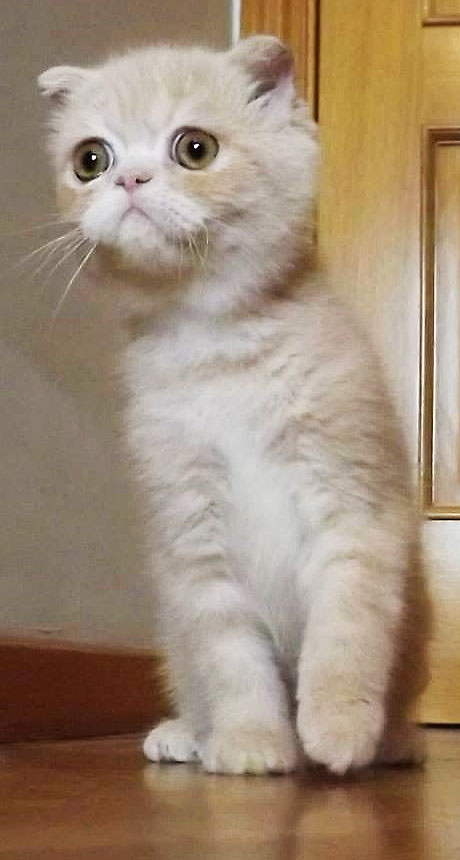