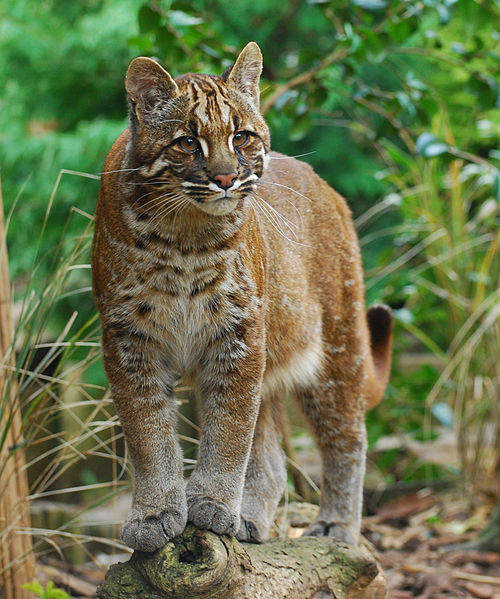 African Golden Cat
Photograph: Wikimedia Commons
Golden Cats are sturdy strong felines with long legs and large paws. These creatures are over twice the size of our own domestic cats (at 1 metre long and 45 cms tall). A fully grown adult can weigh 15 Kg or more. Fur can be russet red to golden-brown but may range to black and grey also (leading to the common nickname “Fire Cat” no doubt. Their coat is of moderate length but very thick and generally unmarked, although cats in the more northern regions of Asia (and Africa) are more likely to have spots and stripes which closely resemble the markings of the Leopard. Ironically, this beautiful coat and unique colouring is one of the traits of this animal that places them in the greatest danger. In Burma and Thailand a golden cat has for centuries been known as a “Fire Cat”. Legend advises that carrying one hair (taken from this animal) will give the bearer protection from tigers! It’s also said that burning a pelt from this cat will drive tigers away from the surrounding area. However, hunting of this cat is banned in a number of countries (and rightly so). With its restricted natural habitat depleting over time, along with the bush meat trade, the African golden cats might soon be in danger. In parts of China they are known as the “Rock Cat”. They range (in Asia) from Nepal and northeast India through southeast Asia, China, Thailand, Malaysia and Sumatra. Unlike the African cat however, the Asian species is considered to be more abundant throughout their range. Apart from the (often) red coat the most distinguishing feature of this cat are the white lines bordered with black running across the cheeks, and from the inner corners of the eyes up to the crown. As with many cats, the underside and inner legs are white. The backs of the short, rounded ears are black, with a whitish central area, and the eyes can be usually greyish green or amber. The African golden cats (Profelis aurata) are found in the humid rain-forest parts of Western and Central Africa and also in the dryer secondary forests of these regions where they can be quite active in the lower part of the tree canopies. They are closely related to their Asian cousins although the two are separated by more than 6,400 kilometers and over a million years of evolution! It is believed that the split in Genes occurred when the forests covering the area from Senegal to China gradually turned to vast deserts. It is believed that over the years the deserts isolated the two Golden Cat populations. Both the Golden Cat Species resemble the Caracal Cat and also the Serval Cat. They are (similarly) nocturnal forest dwellers, preferring deciduous and tropical rain forest, and occasionally more open areas with rocky tracts. In this terrain their long legs make them highly agile and excellent at climbing trees. Nevertheless, they spend most of their time living on the ground walking on their large paws and curling their striped tails up at the tip. END_OF_DOCUMENT_TOKEN_TO_BE_REPLACED