Skip to content
The Jaguarundi (Puma yagouaroundi) is a small but stocky wild cat native to Central and South America. Jaguarundis are also believed to have been introduced in the U.S. state of Florida and have then migrated to the coastal regions of Alabama. However, sightings are rare and no findings of live or dead specimens have been documented. 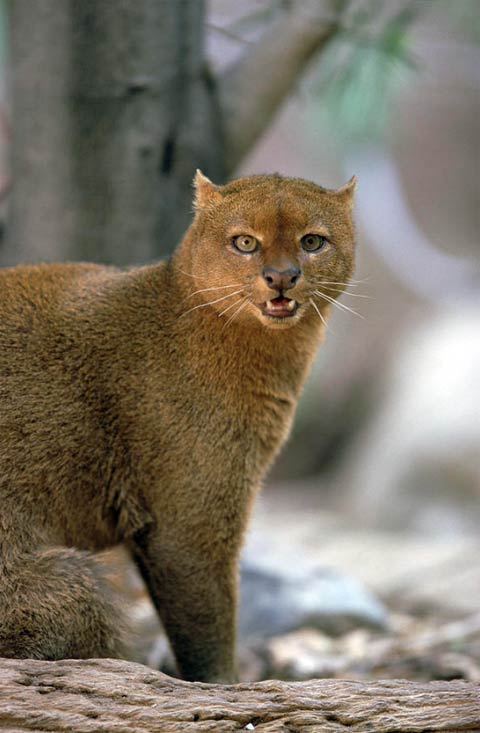 Jaguarundi
Photograph: Konrad Wothei
The physical appearance of the Jaguarundi cat is perhaps the least cat-like of all the cats. It has short legs, an elongated body and a long tail, giving it an appearance somewhat like an otter or pine marten. For this reason, these animals are sometimes referred to as “otter cats.” The ears are short and rounded. The coat is unspotted and uniform in color, with, at most, a few faint markings on the face and underside. The coat can be either blackish to brownish grey (grey phase) or foxy red to chestnut (red phase); individuals of both phases can be born in the same litter. The two color phases were once thought to represent two distinct species. In some Spanish speaking countries, the Jaguarundi is also called leoncillo, which means ‘little lion’. Other common names for the Jaguarundi include: “gato colorado”, “gato moro” and “tigrillo”. These names are also applied to the Margay Cat, but the resemblance between these two distinct species is minimal. 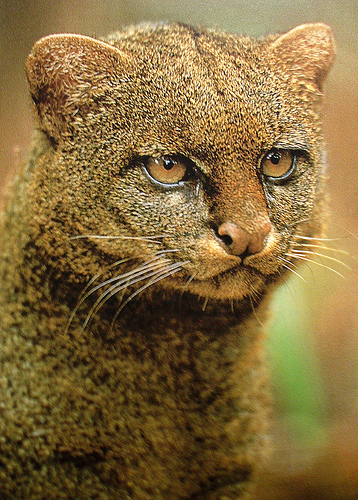 Portrait of a Jaguarundi
Photograph: Creative Commons
Jaguarundi are quite a lot larger than a domestic cats, having a total length of 53 to 77 cm (21 to 30 inches). The tail length is 31 to 60 cm (12 to 24 in). A fully grown specimen can weigh 25 pounds, though average weight is 3.5 to 9.1 kg (7.7 to 20 lb). The Jaguarundi is found from southern Texas and coastal Mexico in the north, through central and South America east of the Andes, and as far south as northern Argentina. Its habitat is lowland scrub areas (usually close to a source of running water), and may include anything from dry thorn forest to wet grassland. While commonly found in the lowlands, they have been reported in mountainous regions up to 3,200 metres (10,500 ft). Jaguarundis also occasionally inhabit dense tropical areas. Jaguarundis are primarily diurnal, being active during the day rather than in the evening or night time. They prefer to hunt on the ground but will climb trees when this is called for. They will eat almost any small animal that they can catch, typically rodents, small reptiles and ground-feeding birds. They have also been observed to kill larger prey, such as rabbits and opossums; relatively unusual prey include fish and even marmosets. Like many other cats they also include a small amount of vegetation and insects in their diet.

The ‘Little Lion’ seeks some shade.
Photograph: Creative Commons
Although in captivity they are willing to tolerate the close presence of other members of their species, in the wild they are generally encountered alone, suggesting a solitary lifestyle. Their home range is widely variable, depending on the local environment; individuals have been reported as ranging over territories of anything from 6.8 to 100 square kilometres (2.6 to 39 sq mi). Like other cats, they scent mark their territory by scratching the ground or nearby branches, head-rubbing, urination, and leaving their faeces uncovered. They are shy and reclusive, and it is reported that they are very cautious of man-made traps. Jaguarundis make a wide range of vocalisations, including purrs, whistles, yaps, chattering sounds, and even a bird-like chirps. In 2008, the IUCN re-classified the Jaguarundi as Least Concern, although they considered it likely that only the large reserves of the Amazon basin could sustain long-term viable populations of this cat.