Skip to content
Grumpy Cat (aka. Tardar Sauce) was born on April 4, 2012 in Phoenix Arizona. She is a domestic shorthair breed of feline. According to her owner Tabatha Bundesen, her mother was a regular Domestic Shorthair Calico and her dad was a grey-striped housecat. 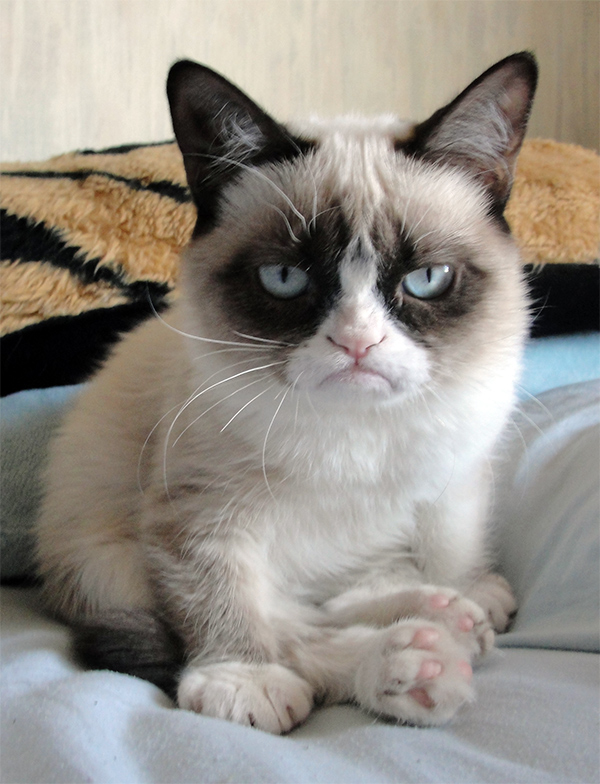 Tardar Sauce aka. Grumpy Cat
Photograph: GrumpyCats.com
Tardar is undersized and has hind legs that “are a bit different”. She has endearing panda patches around her sky blue eyes, offset by a permanently down at the mouth expression on her jowls. It is said by Mrs Bundesen that this grumpy-looking face is due to feline dwarfism and an under bite. Undoubtedly these unique features have been the reason for Tardars popularity……and what a rise to fame it has been, Tardar has a bestselling book, several movies and has already made it on to the cover of The Wall Street Journal and the New York magazine. Grumpy Cat merchandising is big business …. Today the “Grumpy Cat Inc. Corporation of Ohio has an estimated value of well over a Million Dollars…Tardar has a brother called Pokey who keeps her company around the house. Ironically, Tardar Sauce is calm and “actually really nice” whereas Pokey is the one with a grumpy personality. 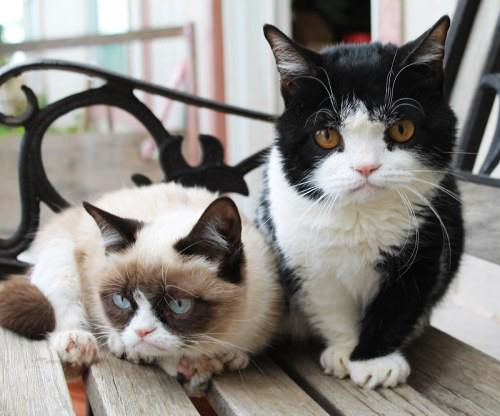 Pokey “the grumpy one” with Grumpy Cat
Photograph: GrumpyCats.com
According to the Bundesens, Tardar Sauce is a normal cat “Ninety-nine percent of the time”… “Photo sessions are only once a week, and handling by strangers is limited”….” She’s very well taken care of, and we love her.”Thats nice to know!~~~~ a few facts about grumpy cat are listed below ~~~~Grumpy Cat merchandising is now in full flow with: Movies, Calendars, T-Shirts, Plush and Fluffy toys, A coffee beverage ‘Grumppuccino’, Mugs, Mats, T-shirts, the endorsement of Friskies Cat food, 1.3 million Likes on facebook and Photo and Weather Apps for the iPhone…. Grumpy says … “all this success ain’t changed me at all… it’s others that treat me differently, thats all :(”

Link to a news report about Tardar Sause

Information from Wikipedia, The Times(UK) and other sources