Skip to content
The Burmese is a breed of domesticated cats split into two subgroups: the American Burmese and the British Burmese. Most cat registries do not recognise a split between the two groups, but those that do formally refer to the type developed by British cat breeders as the European Burmese. The Burmese was first recognized as a distinct breed in America in 1936 by the Cat Fanciers’ Association. Owing to the extensive breeding with Siamese cats that had been used to increase the population, the original type was overwhelmed and registration was temporarily dissolved during the 1940s. The breed was recognized by the UK Governing Council of the Cat Fancy in 1952. In 1953, after years of selective breeding, Burmese cats in America once again conformed to type and were recognized. 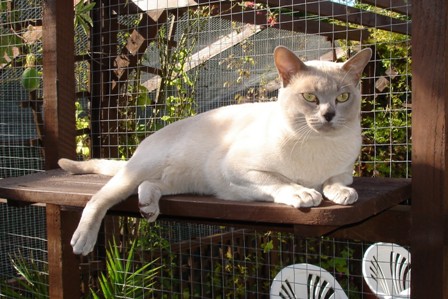 The Birmese Cat. “..vocal like the Siamese but have softer, sweeter voices”
Originally, Burmese cats were exclusively brown (sable), but years of selective breeding have produced a wide variety of colours. Different associations have different rules about which of these count as Burmese. Burmese cats are known for being sociable and friendly with humans, as well as intelligent. They are very vocal, and often call to their owners. Throughout the modern history of Burmese, there has been much breeding with Siamese leading to such give-aways as blue or green eyes in the normally yellow-eyed breed. In fact, the Tonkinese cat is a now-recognised cross between Burmese and Siamese.

The Burmese is considered a foreign shorthair in the United States. Accepted eye colour for the breed is gold or yellow, although interbreeding with Siamese may lead to blue or green. The coat is known for being glossy, with a satin-like finish. As with most short-hairs, it requires no additional grooming. The shape of the British breed is more moderate but must not be Oriental, while the American breed is sturdier in build. Longer lived than most pedigree cats, they often reach 16 to 18 years of age. Burmese are vocal like the Siamese but have softer, sweeter voices. They are people oriented, forming strong bonds with their owners, gravitating toward all human activity. The CFA breed information on the Burmese implies that all survival instinct of flight or fight seems to have been bred out of them. However, other sources note that, while rarely aggressive with humans, Burmese cats tend to be able to defend themselves quite well against other cats, even those larger than themselves. Burmese maintain kitten interests and energy throughout their adulthood and are very athletic and playful. In some instances they even retrieve items as part of a game. Although all cats are obligate carnivores, some Burmese will sample fruit and vegetables. END_OF_DOCUMENT_TOKEN_TO_BE_REPLACED