Skip to content
The Bombay is two distinct breeds of cat (please see below). These are muscular yet agile cats with a black coat. The heads of Bombay cats are rounded and wide with a short tapered muzzle. The eyes, which are of golden or copper color, are rounded and set wide, and their ears are broad, slightly rounded and medium sized and, like the eyes, set wide. 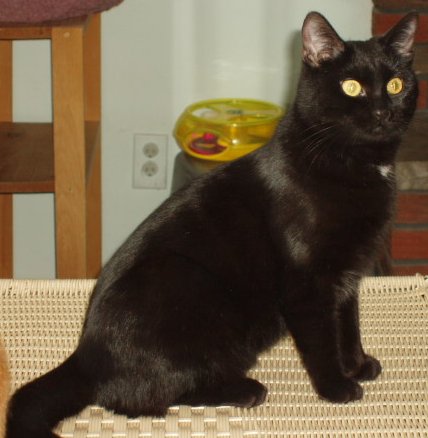 American Bombay
The Bombay has a coat that is short, satiny and tight to the body. Bombay cats do not require grooming, although petting the cat will keep their coat shiny and will also remove dead hair. A rubber brush can help when the cat sheds larger amounts of fur (uncommon). If the cat is fed a balanced diet, the coat will shine and the cat’s naturally energetic personality will become evident. Personality Bombay cats crave human affection like most felines. The Bombay appreciates affection and purrs loudly. Bombay cats are quiet and watchful and prefer living indoors. They can be affected by loud intrusive noises as loud noises make the Bombay nervous. A symptom of this nervousness is that they lose fur from their belly and near their tail. One remedy for this is to simply keep the cat indoors or away from loud noises and make sure they have somewhere to hide. Some convenient locations where a cat can hide are behind chairs, cupboards and almost anywhere that it is difficult for a predator to gain entry, including spaces behind TVs, inside cabinets and underneath small tables. While Bombay cats will tolerate other breeds of cat, they may tend to dominate other cats. Bombay cats seem to get along well with dogs. Dogs are pack animals and have a pecking order which the Bombay will take advantage of. Like most cats that have been raised properly, Bombay cats are smart, agile and inquisitive. They will often seek out human interaction. Bombays will investigate packages and will commonly chew through bags and containers to get at food. This can lead to problems if they eat chicken bones which can injure the cat’s throat. Bombay cats are by nature lap cats. They seek heat and will jump up on their owner’s backs and rest around their neck for comfort and reassurance.These cats are head-bumpers and nose-rubbers, Some can be very “talkative” (meow loudly) and have distinct “voices”. The Bombay will often “fetch”, and takes on other dog-like characteristics. These cats love nothing more than to be held and fussed over. Sensitive, reserved and intelligent, the Bombay is suited to life in a quiet home, where it is affectionate to the whole family. Both males and females are excellent pets. Bombay cats enjoy being around anyone, but may select someone specific to pay the most attention to. They are wonderful for families with children but may be at first annoyed with a new cat in the house. Bombay cats are rumoured to have sometimes unusual diets as lap cats. They may actually eat not just sour cream, but baked cookies or beans if the situation arises. Like many other species of domestic cats, they are rather sneaky and creative at the kitchen table. British Bombay The British Bombay cat is the name given to black cats of the Asian group. It is a cat of Burmese type with a black coat, toes, nose, and copper to greenish eyes. American Bombay The American breed called Bombay was created in 1958 in Louisville, Kentucky, when Nikki Horner of Shawnee Cattery deliberately bred an American Shorthair with a Burmese for the purpose of creating a domesticated cat that resembled a wild panther (also known as baby panther). The offspring of this breeding did indeed resemble the black leopard of India. The name came from the Indian city of Bombay (now Mumbai). Horner called her creation the “patent leather kid with the new penny eyes.”