The Stately Serval, A highly intelligent Cat
Photograph: Wikimedia Commons
The Serval (Leptailurus Serval), is a medium-sized African wild cat which has lion and cheetah ancestors. (It is the cheetah which is thought to have descended from ancient Servals).The serval is native to Africa, where it widely distributed south of the Sahara. Its main habitat is the savanna, although the light coloured (melanistic) strain of this animal are more usually found in mountainous areas at elevations up to 3,000 Metres or 10,000 ftThe Serval needs rivers and streams within its territory, so it does not live in semi-deserts or dry steppes. Servals also avoid dense equatorial jungles, although they may be found along forest fringes. They are able to climb and swim, but seldom do so.Servals are nocturnal, and so hunt mostly at night, unless disturbed by human activity or the presence of larger nocturnal predators. Although the serval is specialized for catching rodents, it is an opportunistic predator whose diet also includes birds and small mammals, fish, and frogs. It has also been seen feeding on larger animals, such as deer, gazelle, and springbok. The Serval eats very quickly, sometimes too quickly, causing it to gag and regurgitate due to clogging in the throat. Small prey are though devoured whole. Like many cats, Servals are able to purr. The Serval also has a high-pitched call, and can hiss, cackle, growl and meow. As part of its adaptations for hunting in the savannas, the Serval has extremely long legs (the longest of all cats, relative to body size) for jumping, which also help it achieve a top speed of 80 kilometres per hour (50 mph). The long legs (and neck) also allow the Serval to see over tall grasses, while its very large ears are used to detect prey, even those burrowing underground. Servals have been known to dig into burrows in search of underground prey, and to leap 2 to 3.6 metres into the air to grab birds in flight or to pounce on ground prey. While hunting, the Serval may pause for up to 15 minutes at a time to listen with eyes closed. 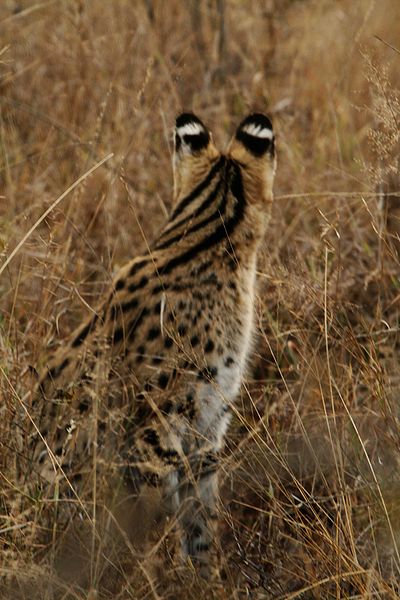 A Serval looking from the rear. The eyespot markings or ocellus are used to signal to Serval kittens when hunting.
Photograph: Creative Commons Attribution 2.5
The Serval then is an proficient killer, catching prey on an average of 50% of attempts (with a 67% success rate at night), compared to around one in ten attempts for most species of cat.Servals are extremely intelligent, and demonstrate remarkable problem-solving ability, making them notorious for getting into mischief, as well as easily outwitting their prey, and eluding other predators. The Serval will often play with its captured prey for several minutes, before consuming it (where have we seen that before, Ed.). In most situations, Servals will ferociously defend their food against attempted theft by others. Males can be more aggressive than females. END_OF_DOCUMENT_TOKEN_TO_BE_REPLACED