Skip to content
Forest wardens in India’s Gujarat state have rescued a three-year old leopard which had fallen into an open well. The leopard is the second of its kind to be rescued in the area this week, highlighting the growing problem of creatures loosing their habitat and having to stray into populated areas for food.

A young leopard peers towards a rescuers torch beam
Photograph: Biju Boro/AFP/Getty
The distressed leopard was finally winched to safety after many hours of incarceration and trauma. The animal was tranquilised using a dart after its struggles against a noose round its belly were thought to be harming the animal. Eventually the three-year-old animal was lifted from the water and hauled onto a wooden frame by a team of eight wardens in the village of Aambaliya. It is said that the Leopard is becoming India’s Urban Fox as incidents such as this are growing in frequency as shrinking natural habitats forces more of these big cats to venture into human territory. They approach settlements where they are tempted to prey on domestic livestock including dogs, pigs and goats, and of course they will always be in need of a drink of water. 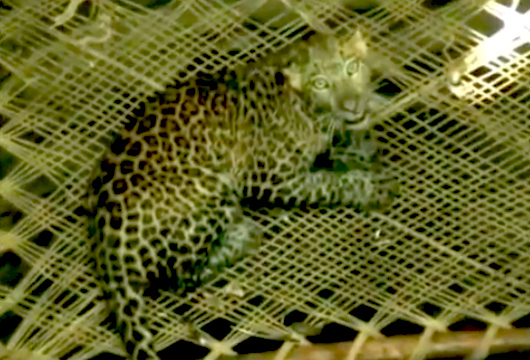 Leopard in the net. On his way to Freedom (oh sorry, the local zoo)
Photographs: Reuters
Leopards were once common across all of southern Asia but have been recently classified (since 2008) as ‘near threatened’ by International Union for Conservation of Nature. In May 2010, the Wildlife Protection Society of India estimated that at least 3,189 leopards were killed in the country since 1994. 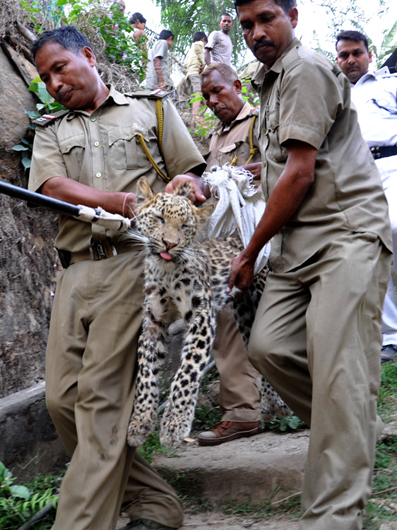 The animal is sedated and taken to the nearby zoo. Poor Thing!
Photographs: Photo: Biju Boro/AFP/Getty
Norman and I are pleased the animal was freed from his ordeal but feel that incarcerating him in the local zoo (and not setting him free) was a little uncalled for. However we have no knowledge of affairs in this region and so hope the leopard is given a large home in which to live.