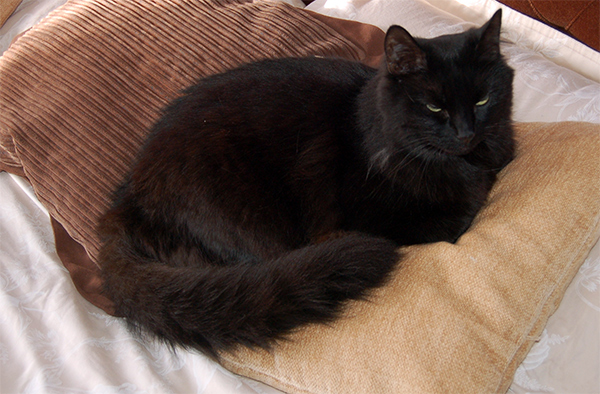 “A catless house is a soulless house”

..so said Sir Patrick Moore the well respected and eccentric astronomer who sadly passed away in December 2012, (and he should know what he was talking about as he had seen into the deepest reaches of our universe! Norm) As well as being a top flight Astronomer Sir Patrick Alfred Caldwell-Moore CBE, FRS, FRAS was a researcher, radio commentator and U.K. television presenter, who also happened to love all things CAT.

Patrick and Ptolomy pose for the camera
Photo: hiltonratcliffe.com
Well, we here at Moggyblog couldn’t agree more ( moore geddit?) with his comment so this month’s cat of the month is Ptolemy, One of Sir Patrick’s many cats who was with him along with close friends when he died. Of course we musn’t leave out Patricks other feline friends Jennie and Smudgie.

Jennie and Sir Patrick in amongst the globes.
Photo: unknown
As well as helping to map the surface of the moon and helping us all to look at the planets and stars in the night sky with a little more understanding, Sir Patrick Moore was a great cat enthusiast who supported the cat charity ‘Cats’ Protection” in many ways throughout his life. Although he wrote over 70 books on astronomy, Sir Patrick also recently wrote about his personal experiences with cats in the fabulously titled book ‘MIAOW! Cats really are nicer than people!’ (which, let’s face it, we all knew anywayNorm). Ptolemy, Sir Patrick’s last cat in a long line of family cats, was named after Claudius Ptolemy AD 90-AD 168, who was a Greek-Roman astronomer (amongst other things) who lived in Egypt. We hope that Sir Patrick is now happy with his previous beloved cats among the boundless galaxies and countless stars. We also hope he is pleased with Moggyblog’s small homage to him (and Ptolemy), one of the many cats who inspired him in his lifetime. Patrick certainly inspired my love of the stars with his regular TV program ‘The Sky at Night‘.