Bob the street cat and his friend the Street Musician (and now author) James Bowen have been inseparable since their chance meeting in Spring 2007. 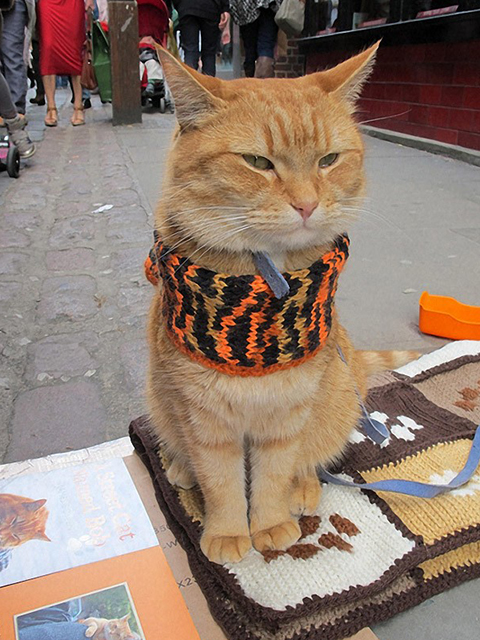 Bob in one of his favourite neck scarfs
Photograph: Comuedu.ru
James Bowen was once a homeless musician, barely scraping though, until he had an encounter with a homeless ginger Tom cat he named ‘Bob’. One day James returned to his sheltered accommodation in Tottenham north London when he saw

Over the next few days James found that Bob was a half starved stray who had been wounded (probably) in an animal fight. Clearly Bob was not owned by anyone in the vicinity, so was taken in, given food and nursed back to health, with the help of the local RSCPCA center, who incidentally asked James to pay 22 pounds (or a day wages) for the drugs to treat the poorly creature. Back at home, James was really glad of the company of lively Bob but at this point he decided he was going to let Bob go back to his street home and life as a stray cat….but ginger Bob was having none of it…. 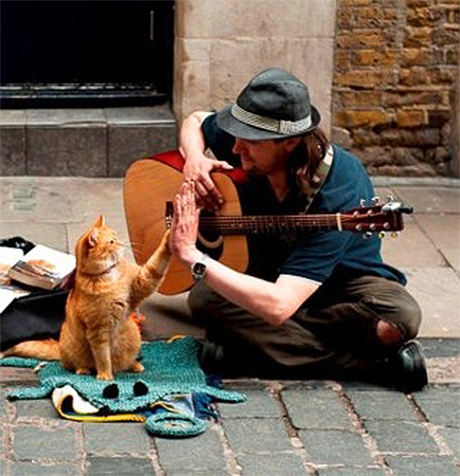 Bob High Fives James
Photograph: Comuedu.ru
Bob had decided that that savior who had come to his rescue would forever be His friend. Bob began to shadow Jim around wherever he went. So what could Jim do?… of course Bob became Jims’ best friend. When James plays guitar on the street Bob accompanies him. He rides round on James’ shoulders when he doesn’t want to walk and also gives James High Fives..Paw to Hand! Bob proved to be a real attraction to the passes by too. James found that his takings for entertaining the passing public grew and grew. 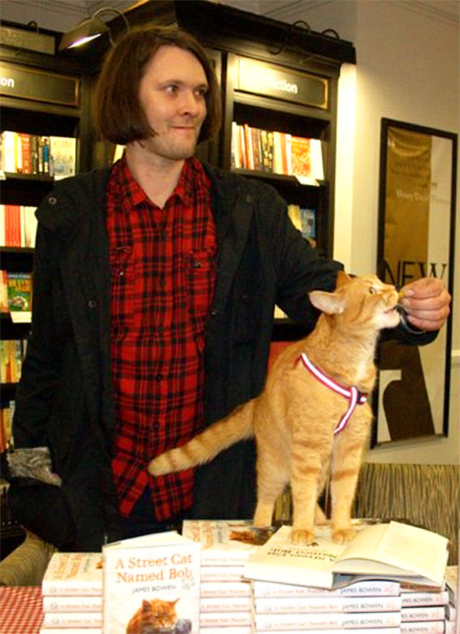 James gives bob a tidbit at a book signing
Photograph: Comuedu.ru
The story ends and begins with James writing a book about his adventures and his eventful life on the street with Bob. James opens by saying

James could not have imagined how this meeting with a stray cat would change his life forever.