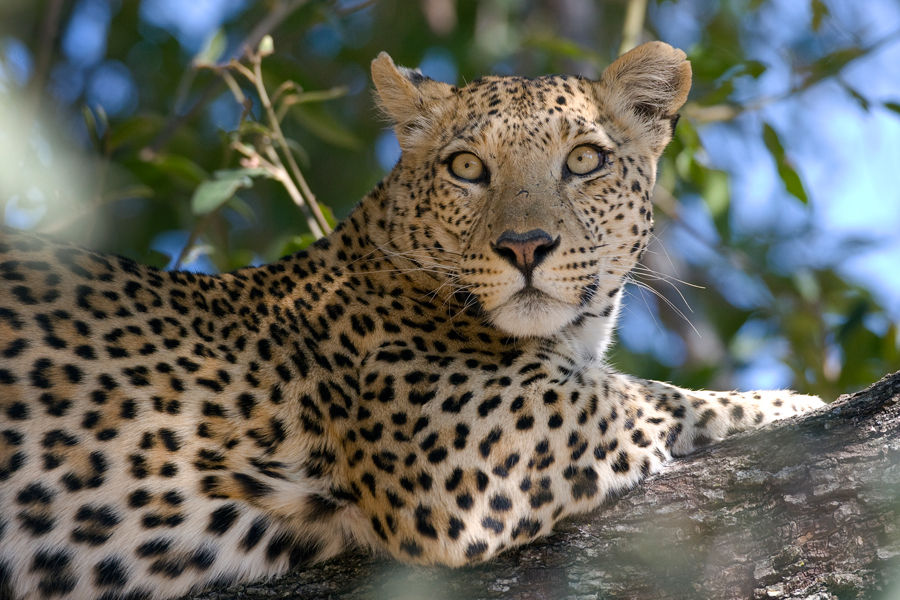 Wild female Leopard
Photograph: Patrick Meier
The story of how this particular female Leopard came to be up a tree is recounted by Patrick, the photographer:
“This photo was taken in a place called Xakanaxa, in the Moremi Game Reserve, Northern Botswana. We followed this female leopard for about 20 minutes. She went up and down some tall trees, getting closer and closer to a herd of impala. Eventually, when she started to stalk, she vanished from our sight in a single leap.”
The African Leopard (Panthera pardus pardus) is a leopard subspecies occurring across most of Sub-Saharan Africa. The International Union for Conservation of Nature (IUCN) classified leopards as Near Threatened in 2009, stating that they may soon qualify for the Vulnerable status due to habitat loss and fragmentation. They are becoming increasingly rare outside protected areas and the population is decreasing gradually. The most secretive and elusive of the large carnivores, Leopards are solitary creatures and predominately nocturnal.Leopards are known for their ability in climbing (and said to be the strongest climber of the large cats). By climbing, the Leopard can use this vantage point to gain a better view of possible prey in an area. These cats have been observed dragging their kills up trees and hanging them there. They are powerful runners, reaching speeds of up to 36 mph in the chase. They are also capable swimmers (although not as strong as some other big cats, such as the tiger). They are very agile, and can leap over 6 metres (20 ft) along the ground, and jump up to 3 metres (10 ft) vertically.Leopards are versatile, opportunistic hunters, and have a very broad diet. They feed on a greater diversity of prey than other members of the Panthera species, and will eat anything from dung beetles to male giant elands, up to 900 kilos in weight. Their diet consists mostly of ungulates (hooved animals) and monkeys, but they also eat rodents, reptiles, amphibians, insects, birds, and fish. In Africa, mid-sized antelopes provide a majority of their prey, especially impala and Thomson’s gazelles.They have been heard producing a number of vocalizations, including grunts, roars, growls, meows, and “sawing” sounds. To hear some of these recorded sounds you may want to try this link.