When a cat reaches water you expect it to be inquisitive, but to shy away from this unfamiliar medium. Not so with the Fishing Cat, one of several felines which are comfortable in and around water.Fishing cats are found, not surprisingly, in a number of habitats with an expanse of water nearby. Densely vegetated areas along rivers and streams including marshes and mangrove swamps are typical environments. These cats are powerful swimmers, pushing themselves through the water with their hind feet. They wade and swim in shallow water (like the similar creature the Civet), hunting for a variety of aquatic prey, including fish, frogs and toads, snails and crustaceans.They will also stalk, catch and eat small birds, mammals and snakes. A curious and unique feature of this cats hunting technique is to attract fish by lightly tapping the water’s surface with its paw, mimicking insect movements. Then, it dives into the water to catch the fish in its claws! It will also swim underwater to prey on ducks and other aquatic birds. 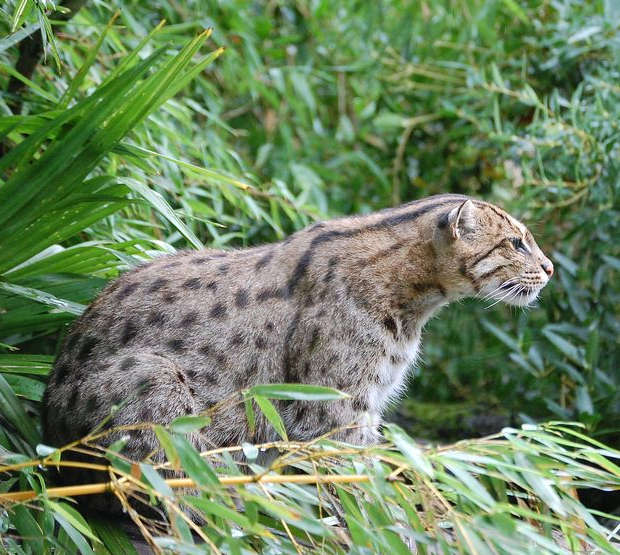 The Fishing Cat ~ Can grow to almost four feet in length
Photograph: Wikimedia Commons
As you can see the fishing cat is robustly built with a big, broad head and an elongated snout. The short, coarse fur is a dappled olive-grey in colour, and tinged with an orange to brown fleck. The body is covered in rows of dark brown spots and there are six to eight dark lines running from the forehead to the neck. Underneath the body is whitish and spotted. The eyes of this cat have greenish irises, and the ears are rather short and rounded, with black exterior and prominent white spots in the middle. The legs are short (as is the tail) with the forelimbs having two distinct elbow bars. Their claw sheaths are short and incomplete, which prevents the claws from being fully retracted. The tail is less than half the head and body length, is thick, and has a series of incomplete rings with a black tip.The following video shows rare footage from the BBC Wildlife unit. Because of the large file size this is a remotely hosted file. 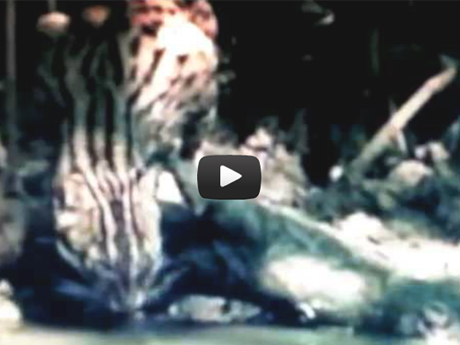 Prionailurus Viverrinus, in the Wild ~ Rare Footage from the BBC – Link to remote file
Photograph: BBC
It is believed that Fishing Cats are able to breed all year round. When mating has occurred dens are sought out in dense shrubbery, in water sedge or reed beds, in hollow trees or in rocky crevices. In this protected and secluded location one to four, usually two, kittens are born after a 63 – 70 day gestation period.!–more–Studies of captive fishing cats have shown that kittens weigh around 170 grams at birth. Their eyes are open by 16 days and the kittens are weaned between four and six months. However meat has been taken after eight weeks of life. Kittens grow independent between 12 to 18 months and may be considered to be Adult at eight to nine months (weighing up to 25 pounds for males to about 15 pounds for females when fully grown). It is thought that in the wild the adult male may help with the care and supervision of the young, but this is unverified. So far captive individuals have lived to 12 years of age. 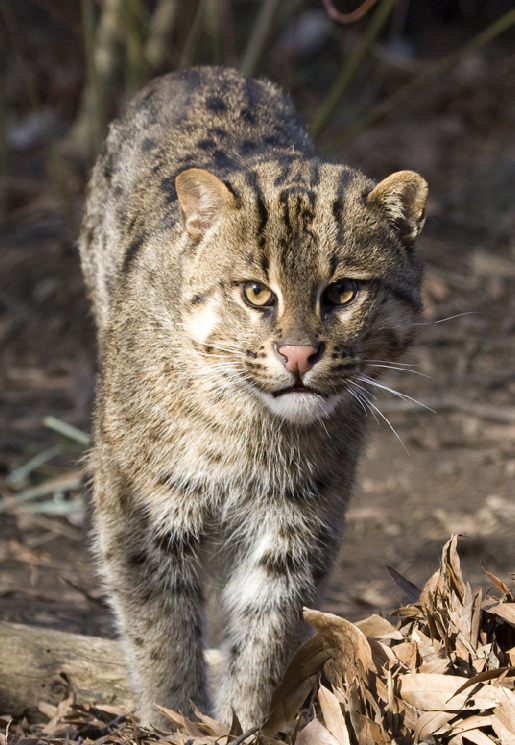 The Fishing Cat ~ Usually nocturnal it is rarely seen in the wild
The fishing cat’s general distribution is southwest India, Sri Lanka, countries of the southern Himalayas, Bangladesh, Vietnam, Thailand, Burma, China, and the Indonesian islands of Java and Sumatra. However, these cats are not found all throughout this broad area because of their habitat preferences of densely vegetated areas and near to a water course or lake.Fishing cats are are listed as endangered on the IUCN’s Red List of Threatened Species (Appendix II of CITES). They are protected over most of their range, with the exceptions of Bhutan, Malaysia and Vietnam. However their population status overall is not known.They are threatened by habitat loss (mainly Wetland destruction) and the threat of human hunting for food and fur. People have drained many wetland areas to make room for farmland and roads. Pollution from industries has poisoned rivers and streams where fishing cats once fed. However, fishing cats appear to do well in suburban habitats, so they may prove adaptable to human activities that some other species.