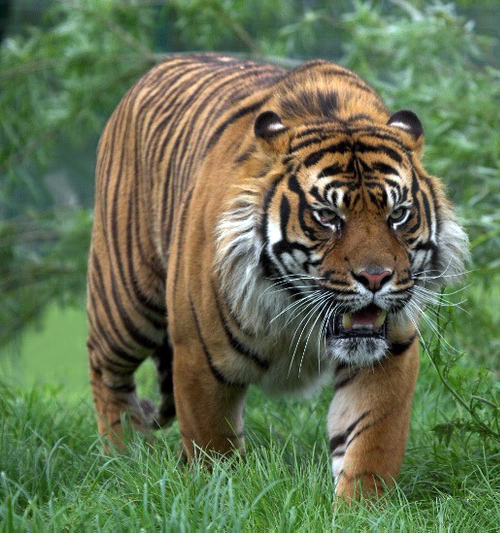 An adult Sumatran Tiger stalks prey in the forest
Photograph: No Credit for this Image
The largest (Siberian) tigers measure up to 3.3 metres (11 feet) in total length and weigh up to 300 kilograms (660 pounds). The most numerous tiger subspecies is the Bengal tiger. Tigers have a lifespan of ten to fifteen years in the wild, but can live longer than twenty years in captivity. They are a highly adaptable cat, and range from the Siberian coniferous forests (taiga) to the open grasslands of India and the Indonesian tropical mangrove swamps. Tigers are territorial and generally solitary animals, requiring large areas of deep dense vegetation (in which to hide and stalk, by means of its camouflaged colouring), proximity to drinking water, and of course an abundance of prey. Tigers are often found bathing in ponds, lakes, and rivers (especially in the heat of the day). Together with the jaguar, the tiger is a strong swimmer and is able to carry large prey animals through water as it swims (no doubt using its sharp teeth (which grow up to 5 inches in length) and extremely strong jaws to grip the prey carcass. Incidentally, the word “tiger” is taken from the Greek word ‘Tigris’, which is possibly derived from a Persian source meaning “arrow”, a reference to the animal’s speed (not its sharp teeth). Sadly, the tiger is an extremely endangered species, primarily due to human intervention (in deforestation and fragmentation in their habitat and also because of human hunting) but also due to the dangers of everyday existence. For example, only fifty percent of Tiger cubs survive to independence from their mother, which occurs at around two years of age. Also only 40 percent of these survivors live to establish a territory and begin to produce young. The risk of mortality continues to be high even for territorial adults, especially for males, which must defend their territories from other males. Consequently (with the human threat coupled with the everyday dangers of life) three of the nine subspecies of modern tiger have now gone extinct, and the remaining six are classified as endangered, some critically so. 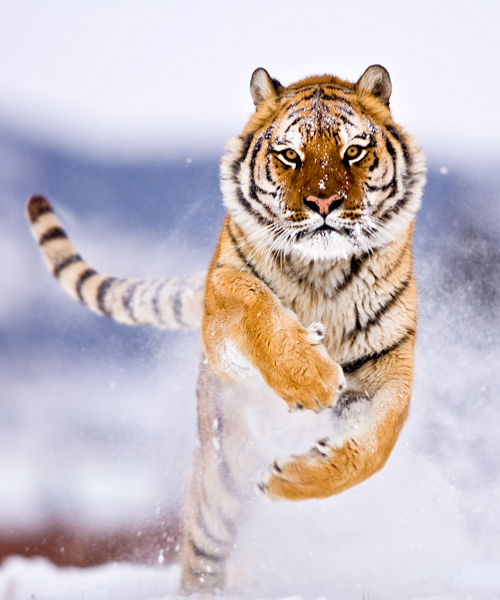 Tiger ~ clawing the powder snow as it runs
Photograph: Creative Commons
Tigers are among the most recognisable, and are in fact the most popular, of the world’s animals. They have featured prominently in ancient mythology and folklore, and continue to be depicted in modern texts and videos. Tigers appear on many flags and as mascots for sporting teams. Tigers are the national animal of several Asian nations, including India. Tigers typically have rusty-reddish to brown coats, a whitish underbelly to rear area and a white ruff that surrounds the lower jaw, neck and chin. Of course the tiger is well known for its stripes. These can vary in colour from brown or grey to pure black. The form and density of stripes differs between all the subspecies (as well as the ground coloration of the fur). The pattern of stripes is unique to each animal, these unique markings can be used by researchers to identify individuals (both in the wild and captivity).. Unusually, the stripe pattern is also found on the skin of the tiger (shown when the fur is removed). It is believed but not proven that most tigers have over one hundred stripes around the body. Like other big cats, tigers have a white spot on the backs of their ears. It is believed these spots, called ocelli provide a visual indication of the animal from the rear when it is being followed by its cubs or kittens.

Tigers are thought to be nocturnal predators, but, in areas where humans are absent, they have been observed hunting during the daylight hours (using remote cameras). They generally hunt alone and stalk and ambush their prey as most other cats do, using their body size and strength to knock large prey off balance followng through using sharp claws and teeth and a very strong jaw! A tiger’s diet will vary depending upon the availability of prey in their region. The Bengal Tigers in India will mostly feed on larger and medium-sized animals such as sambar, wild boar, a water buffalo and domestic buffalo. The Siberian Tiger’s main prey species include wapiti, wild boar, moose, and musk deer. The smaller species will often eat much smaller prey, such as domestic animals, monkeys, peafowls, hares, and fish. Tigers utilize a variety of vocalizations to communicate over long distances, including roaring, moaning, and chuffing. A tiger’s roar may be heard from distances of more than two miles. A tiger’s moan is more of a subdued roar and is usually made while tigers are calmly walking with their heads in a downward position. What is Known as a tiger’s chuff is a friendly vocalization used primarily for greetings and is only audible at close range. postscript: This article was written in responce to Steven Frys Tweet on the very real crisis facing the tiger populations all over the world. Please view and sign the petition on the website of the painter David Shepherd: https://www.davidshepherd.org/help-us/tiger-time/donate/ Another interesting article about the real plight of Tigers was found here when researching for this post: https://wildlifemusings.wordpress.com/2010/05/31/truth-about-tigers/

The following extract was drawn from the Wikipedia.org ‘Tiger’ Page.