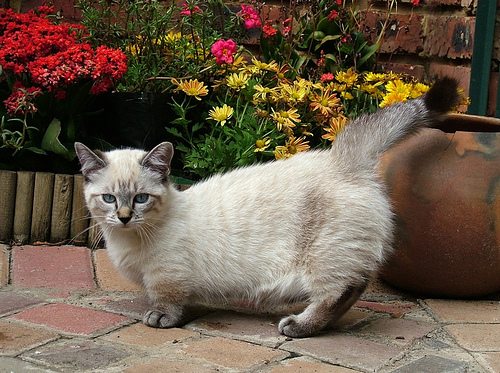 Munchkin cats are a controversial breed. Munchkins have a naturally occurring genetic mutation that results in them having legs which are unusually short… but the question many have asked is “is it ethical to go on breeding these mutant cats”.

It is said that the ‘short leg’ gene of the Munchkin is similar to the gene which gives Basset Hound, Corgi and Dachshund dogs their short stature (the little ‘Scottish Fold’ cats also have this gene). Munchkins though, do not suffer from the many spinal problems that these dogs are prone to. Studies have shown that the spine of a Munchkin cat is very rarely different from that of other cats. So perhaps it is not such a bad thing that they are bred for their small size.

Long before the name ‘Munchkin’ was first used, there had been sightings of these short-legged cats the world over. For example, a large breeding population had been observed in Europe throughout the early part twentieth century. This group had though all but died out by 1950.

It was in 1964 that a solitary cat of the Munchkin breed was first documented in the United States by Ellen Kasten in the town of Westbury, New York, but it was not until 1983 when a music teacher in Louisiana found two pregnant cats (one of which had a litter of short-legged kittens!) that the Munchkin ‘line’ was truly begun.

It took another eight years before the Munchkin was first introduced to the general public. In 1991 a national network televised cat show held by The International Cat Association in Madison Square Garden presented several Munchkins to the adoring public. It was not all roses though as there was much controversy when TICA went on to accept the Munchkin into its New Breed development program in September 1994. Critics predicted that the breed would develop back, hip and leg problems.

In fact studies at the time proved that the Munchkin was a physically sound cat. At the time one veteran show judge resigned in protest, calling the breed an affront to all breeders with ethics. However the Munchkin achieved TICA Championship status in May 2003 (go Munchkin!).

The Munchkin is generally described as a sweet-natured, playful, people-oriented, outgoing and intelligent cat which responds well to being handled. As pets they are very playful and certainly don’t let their shorter legs hinder them from running, jumping and climbing, just like other cats do.

Munchkins are small to medium sized cats with a moderate “semi-foreign” body type. A male Munchkin typically weighs between 3 to 4 kg and is usually larger than a female, which typically weighs between 1 to 3.5 kg. The short legs of the Munchkin may be slightly bowed or cow-hocked (which render these animals of poor show quality). Also, the hind legs can be slightly longer than the front, but these have no noticeable adverse affect on the animal. According to the Animal Planet TV show there are three types of legs on Munchkins: standard, super-short, and ‘rug hugger’. 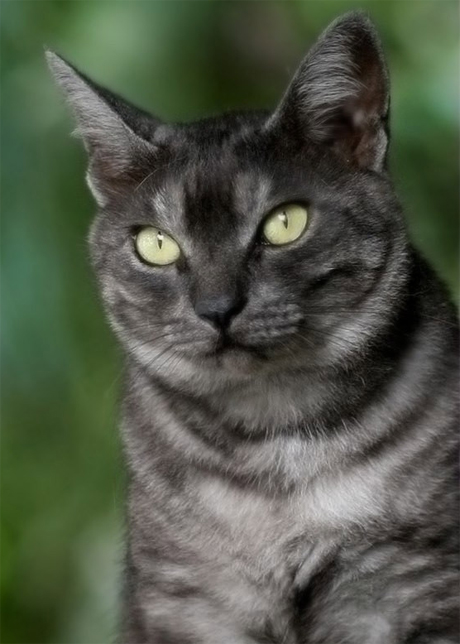 Portrait of a Munchkin
Photograph: Unknown, cropped by Ed

For TICA cat shows, they are separated by fur length into two groups: The Munchkin and Munchkin Longhair. The short-haired variety has a medium-plush coat while the Long-haired has a semi-long silky coat. The Munchkin comes in many colours and coat patterns. This variety stems from the adoption of the ‘outcross’ program, across the breeding participants. This allows Munchkins to be bred with many domestic cats that don’t already belong to a recognised breed.

So, Munchkins are a healthy and hearty cat that in general suffer from the same common health problems as other cats. Some proof of this was provided In 1995, when several Breeders had their oldest Munchkins X-rayed and examined for signs of joint or bone problems. No problems were found!

There is controversy among breeders of pedigree cats as to whether (and if so) what genetic mutations are abnormal and potentially disadvantageous to the cat. The Australian Capital Territory (a territory of Australia) government consider the Munchkin breed to be “malformed animals” and the deliberate breeding of them “unacceptable” because of the “genetic health problems associated with such breeding”. Owners and Breeders of Munchkins declare them to be “a sound breed” that is “ideal” for small homes and not particularly susceptible to health problems.

Several cat registries do not recognise the Munchkin: Federation Internationale Feline, which refuses to recognise what they consider a breed based on a genetic disease. The Governing Council of the Cat Fancy likewise refuses to recognise the breed, considering this breed and others like it to be “unacceptable” because they are based on an “abnormal structure or development”. The breed is also not recognised by the Cat Fanciers’ Association.

It is interesting that despite incompatibly issues when inter-breeding Munchkin cats (leading to none Munchkin cat traits in many of the offspring), there have nevertheless been some amazing cross bred animals. These are just some of the cross ‘breeds’ that have been produced:

By the way, Munchkins were named after the little people in the ‘Wizard of Oz’. But we guess you guessed that already… But did you know that ‘The Wonderful Wizard of Oz’ was written by L. Frank Baum in April 1900 (I just looked it up). Now you remember Dorothys companion the dog ‘Toto’,but theres a little known cat in the story too….