Skip to content
Back Cat awareness day is a day that encourages people to adopt unwanted black cats. It is now to become an annual event, following the massive support it has attracted this year. Thousands of people backed the UKs first ever Black Cat Awareness Day on 27 October 2016, which drew attention to the hundreds of homeless black cats in Cats Protection’s care. It seems black cats are the cats which are least likely to be adopted by the general public here in the U.K. This has led the charity to introduce it as an annual event in the hope it will continue to raise awareness of unwanted black cats into the future. 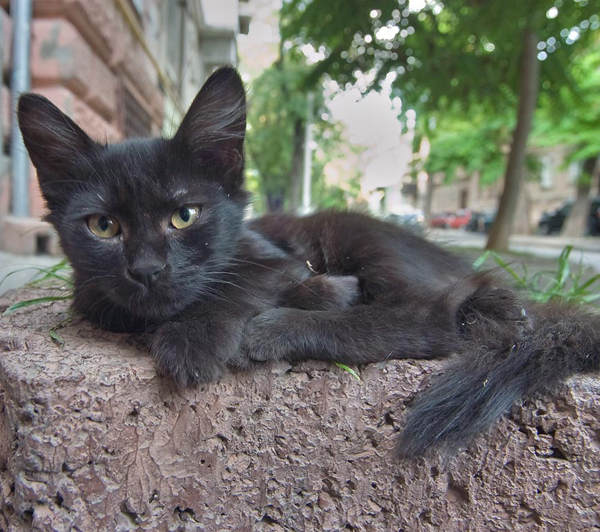 A young black stray, spends another evening on the street
Photograph: A. Sergeev
Tom Briggs, of Cats Protection’s Publications and Digital Team, said: “Black Cat Awareness Day clearly caught the imagination of the cat-loving public and I’d like to thank everyone for helping us spread the word. We were so overwhelmed with the amount of people who tweeted, posted, tagged, befriended and uploaded photos in support of the day that we would be mad not to make this an annual event!” The campaign’s Twitter hashtag, #CPBlackCats, was in the top ten trends on Twitter and at one point it was the third most-talked about subject among UK users, temporarily beating Justin Bieber! Around 26,000 active users visited Cats Protection’s Facebook page, which is twice its daily average, and thousands of black cat photos were uploaded to Flickr, Facebook and YouTube. A YouTube video showing campaign mascot Billy attracted 5,800 views in the lead up to the day and around 1,600 people visited Billy’s Facebook page on the day itself to make friends with him. The campaign also attracted support from celebrity cat-lovers including Twiggy Lawson, Samantha Fox and creator of Simon’s Cat, Simon Tofield. Black Cat Awareness Day was created because Cats Protection is currently looking after 1,300 unwanted black cats, with each one waiting a week longer than average to find a home. Next year’s Black Cat Awareness Day will take place on Saturday 27 October 2012. To adopt a black cat, please log on to the Cat Protection Website – www.cats.org.uk/black-cats or call the charity helpline on 03000 121212.