Skip to content
The Sphynx (also known as the Canadian Hairless) is one of the newer cat breeds. It is reported that the first Sphynx was born in Canada in 1966, in Roncesvalles, Toronto when a hairless kitten named Prune was born. The kitten was mated with its mother (a process known as backcrossing), which produced one more naked kitten. The lack of hair on the Sphynx is caused by a genetic imbalance and occurs about once every fifteen years. Despite the Sphynx appearing to be a hairless cat it is in fact not truly hairless. The skin will have the texture of chamois leather or a ripe peach. This covering is a very soft, fine down, which is almost imperceptible to both the eye. 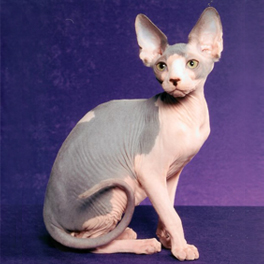 Sphynx cat with typically large ears.
Lack of a thick coat makes the cat quite warm to the touch. Hair in the form of Whiskers and eyebrows may be present or may in some extreme cases be totally absent. It is said that the skin of this feline is the color their fur would have been had it been present, and all the usual cat marking patterns (solid, point, van, tabby, tortie, etc) may be found in Sphynx too. This is a very unusual trait. The personality of the Sphynx is generally warm and friendly, highly intelligent, inquisitive and extroverted. They are also very affectionate and social animals. If kept as a pet the Sphynx should always have the company of others (be they other Sphynx or humans) so that they have companionship throughout each and every day. It is said to be cruel to keep a sphynx isolated for long periods. Many people with typical allergies to cats with full fur coats find that they tolerate the Sphynx breed well. Because Sphynx don’t leave hair all over the house this is thought to make them an easier cat to keep. This is not strictly so! Their lack of hair results in increased body oils so regular bathing is often necessary, which is an inconvenience most cat owners dont have to deal with. Also the Sphynx will be going outdoors as often as your ‘common’ domestic cat (if at all) Care should be taken to limit the Sphynx cat’s exposure to outdoor sunlight as they can develop a sunburn, similar to that caused in humans. In general, Sphynx cats should never be allowed outdoors unattended, as they have limited means to conserve body heat in colder temperatures, and their curious nature can take them into dangerous places or situations. 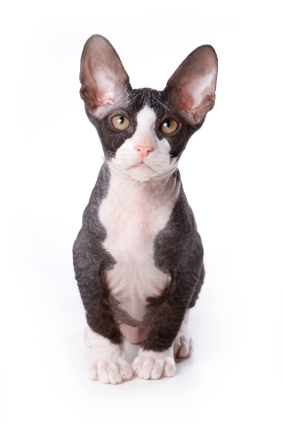 A semi-coated Sphynx showing skin markings.
The Sphynx breed is known for a sturdy, heavy body a wedge-shaped head and an alert friendly temperament. Although hairless cats have been reported throughout history (hairless cats seem to appear naturally about every 15 years or so), and breeders in Canada have been working on the Sphynx breed since the early 1960s, the current American and European Sphynx breed is descended from two lines of natural mutations: Other hairless breeds might have different body shapes or temperaments than those described above. There are, for example, new hairless breeds, including the Don Sphynx and the Peterbald from Russia, which arose from their own spontaneous mutations. The standard for the Sphynx differs between cat associations such as TICA, FIFE and CFA. Sphynx hairlessness is produced by a ‘strain’ of the same gene that produces the Cornish Rex, which has only one of the usual two fur coats. The Sphynx strain (or allele) is incompletely dominant over the Devon allele; both are recessive (or revert) to the wild type. Sphynx were at one time crossbred with Devon Rex in an attempt to strengthen this gene, but unfortunately this led to serious dental or nervous-system problems and is now forbidden in most breed standards associations. A genetic heart defect was also introduced by the Devon Rex breed. The only allowable out-cross breeds in the CFA are now the American Short-hair and Domestic Short-hair. Other associations may vary. In Europe mainly Devon Rex has been used for out-crosses. 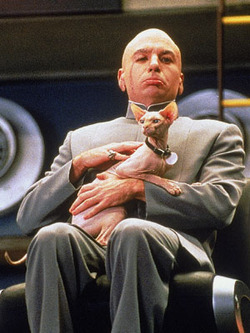 One of many ‘Dr. Evil’ cats, The Sphynx ‘Mr Bigglesworth’