Skip to content
The Russian Blue breed has a lean medium-sized body and a short, plush, blue coat. The colour is a bluish-gray that is the dilute expression of the black gene. The coat is unique to the breed as it is a double coat, with the undercoat being soft and downy, and the longer guard hairs an even blue with silver tips. This “tipping” gives the coat a shimmering appearance. Its eyes are green and ideally should be dark and vivid. 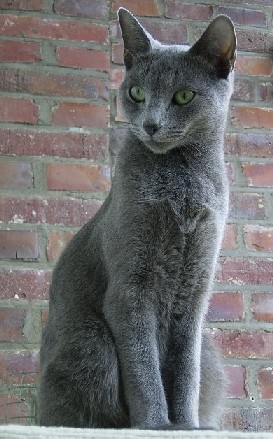 Common imperfections include yellow eyes, white patches on the underside and dark banding on the tail. These cats are highly intelligent and playful but tend to be curious around strangers. They also develop a close bond with their human companions.

Unlike so many modern cat breeds, the Russian Blue is a naturally occurring breed which is believed to have originated in the port of Arkhangelsk, Russia (hence the name), although the evidence for this is purely anecdotal. They are also sometimes called Archangel Blues, as many believe the Russian Blue is a natural breed originating from the Archangel Isles in northern Russia. Legend has these beautiful animals trapped for their plush double coats which are sometimes compared to the coat of a beaver or seal. Originally known as the Archangel Cat or Foreign Blue, it is believed that they were brought by sailors from the Archangel Isles to England and Northern Europe in the 1860s. Rumor also has the Russian Blue as a descendant of the Royal Cat of the Russian Czars and as a favored pet of Queen Victoria. First shown in 1875 at the Crystal Palace in England as the Archangel Cat, the original Russian Blue competed in a class for all blue cats. It was not until 1912 that the Russian Blue was given a class of its own. From its early origins until after World War II, English and Scandinavian breeders worked to develop the foundation bloodlines for the contemporary Russian Blue. Although Russians were imported to the United States as early as 1900, there is little recorded work with the breed in America until after World War II. American breeders combined the English bloodlines with their plush, silvery coats and Scandinavian bloodlines with their emerald green eyes and flat profiles to produce the Russian Blue we know today. In the 1960s the Russian Blue began to gain popularity and has become a favorite both at cat shows and at home.

Beautiful Russian Blue “Annie”
Photograph: Pat Hardy of Machika Burmese & Russian Blues. [taken from the russianblue.org website]
The Russian Blue is a gentle, affectionate cat easily distinguished from other breeds. One of the most outstanding features of the Russian Blue is a short, dense coat of an even, bright blue color with each hair dipped in silver. This silver tipping gives the Russian a silvery sheen and lustrous appearance that can best be appreciated in natural light. Russian Blues come in only one color, blue, and one coat length, short.The density of the coat causes it to stand out from the body and allows patterns to be traced in the coat which remain until you smooth them away. In lovely contrast to the blue coat, the Russian Blue has large, rounded, wide-set eyes that are a vivid green. During and following World War II, due to a lack of numbers of Russian Blues, some cross breeding with the Siamese breed was introduced. The Siamese traits have now been largely bred out. The majority of their modern breeding program has been carried out in the U.S.. Although they have been used on a limited basis to create other breeds (such as the Havana Brown) or add type to a breed in creation (the Nebelung), Russian Blues themselves are shorthaired, blue cats. Russian Blues should not be confused with ‘British Blues’ (which are not a distinct breed but rather a British Shorthair with a blue coat), nor the Chartreux or Korat which are two other naturally occurring breeds of blue cats. During the early 1970s, Mavis Jones, a Russian Blue breeder in Australia, mated a domestic white cat with a Russian Blue with the intent to create a solid white Russian Blue. By the late 1970s, the Russian White and Russian Black colors were accepted by cat fanciers in Australia as true Russian cats. These hybridized colors are accepted in a few other registries and only on a limited basis.