Skip to content
The Norwegian Forest Cat is a breed of domestic cat native to Northern Europe, and adapted to very cold climates. In Norway they are known as Skogkatter or Skaukatter (skog and skau being forms of the word for ‘forest’ in different Norwegian dialects) or more properly, the Norsk Skogkatt (literally, Norwegian Forest Cat). 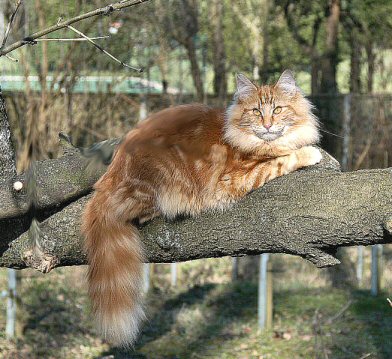 Norwegian Forest Cat.
The breed is very old, and occurred as a natural adaptation to the cold climate of the region, but it was not regarded as anything other than a standard house-cat until the late 1930s, when a small number of ‘Skaukatts’ were shown in Germany and received very favourably by the judges. World War II brought an abrupt end to the fledgling Norwegian show cat industry, and the breed was forgotten until the 1970s. The cats are now being bred and shown in several countries including the United States. The first international association to accept the breed was FIFe, in 1977. They are rumored to be the early ancestors of the Maine Coon and the long-haired Manx. Like Maine Coons, Norwegian Forest Cats are an intelligent, robust and playful breed. They like the outdoors, are well suited to cold conditions and are great hunters. Despite their great affection for the outdoors, however, they also enjoy the company of humans and other pets and will sometimes go looking for company if left alone by their owners. They are not easily stressed and are quite patient, which makes them great for a family with children. They appreciate high vantage points and enjoy climbing trees, or, if they are indoor cats, climbing on appliances, bookshelves and other elevated surfaces in the home. Norwegian Forest Cats have a thick fluffy double-layered coat, tufted ears and a long bushy tail to protect them against the cold. Their coat is essentially waterproof due to its coarse outer layer and dense underlay. They are very large cats with adult males weighing 6 to 10 kg (13 to 22 lb), while females are approximately half that size. Their hind legs are longer than their front legs. They are very intelligent, playful cats that enjoy human company. The nickname of “Wegie” began in the United States and is a shortened version of the word Norwegian.