Skip to content
The Ocicat is a new and still-rare breed of cat which has spots resembling a ‘wild’ cat and the temperament of a domestic animal, named for its resemblance to the ocelot. Despite its appearance, there is no ‘wild’ DNA in the Ocicat’s gene pool. The species is actually a mixture of Siamese and Abyssinian, and later American Shorthairs (silver tabbies) were added to the mix and gave the breed their silver colour, bone structure and distinct markings. 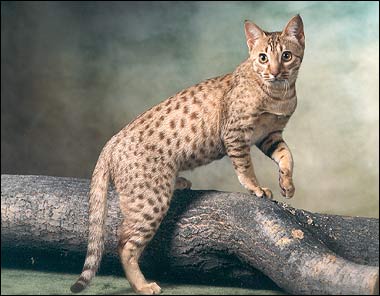 Ocicat – named for its resemblance to the Ocelot and still a rare breed
The first breeder of Ocicats was Virginia Daly, of Berkley, Michigan, who attempted to breed an Abyssinian-pointed Siamese in 1964. The first generation of kittens appeared Abyssinian, but the surprising result in the second generation was a spotted kitten, Tonga, nicknamed an ‘ocicat’ by the breeder’s daughter. Tonga was neutered and sold as a pet, but further breedings of his parents produced more spotted kittens, and became the base of a separate Ocicat breeding program. Other breeders joined in and used the same recipe, siamese * aby, and offspring * siamese. Today the ocicat is found all around the world, popular for its temperament but wild appearance. Ocicats are a very outgoing breed. They are often considered to have the spirit of a dog in a cat’s body. Most can easily be trained to fetch, walk on a leash and harness, come when called, speak, sit, lie down on command and a large array of other dog-related tricks. Some even take readily to the water. Ocicats are also very friendly. They will typically march straight up to strangers and announce that they’d like to be petted. This makes them great family pets, and most can also get along well with animals of other species. Ocicats make excellent pets for people who want to spend a lot of time with their cat, but they do require more attention than cats who aren’t so people-oriented.