Skip to content
The Oriental Shorthair breed is also called a “Foreign Type” cat. This cat combines the Siamese body with a diversity of colorings and patterns. Oriental Shorthairs are intelligent, social animals who bond closely to their people. They are inquisitive, friendly, emotional, demanding and often quite vocal. Oriental Shorthairs have been likened to a Greyhound or a Chihuahua in appearance. Some people say they are ‘dog-like’ in personality, particularly because they become so attached to people. 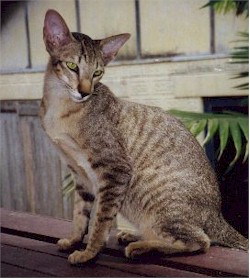 Oriental Shorthair – emotionally demanding and often quite vocal.
Description The Oriental Shorthair is a self-coloured (non-pointed) member of the Siamese Family. They can be found in solid colors (white, red, cream, ebony, blue, chestnut, lavender, cinnamon, or fawn), smoke (white undercoat to any of the above except white), shaded (only the hair tips colored), parti-color (red or cream splashes on any of the above), tabby (mackerel/striped, ticked, spotted, and blotched/classic), and bi-colored (any of the above, with white). In total, there are over 300 color and pattern combinations possible. Though in CFA, pointed cats from Oriental Shorthair parents are considered Any Other Variety (AOV), in TICA, as well as in the majority of worldwide Cat Associations, these cats are considered to be, and compete as, Siamese. Oriental Shorthairs have expressive, almond-shaped eyes, a wedge-shaped head with large ears that fit in the wedge of the head. Their bodies are very elegant yet muscular. When seeing an Oriental Shorthair, one would never guess them to be as solid as they are. The longhaired version of the Oriental Shorthair, Oriental Longhair, simply carries a pair of the recessive long hair gene. Origins The Siamese cat was imported to Britain from Siam (Thailand) in the later half of the 1800s. According to reports, both pointed and solid colors were imported. The gene that causes the color to be restricted to the points is a recessive gene, therefore the general population of the cats of Siam were largely self (solid) colored. When the cats from Siam were bred, the pointed cats were eventually registered as Siamese the others were referred to as “non-blue eyed siamese” or foreign shorthair. Other breeds that were developed from the moggies of Siam include the Havana Brown and the Korat. It was not until 1977 that the Oriental Shorthair was accepted for competition into the CFA. In 1985, the CFA recognized the bicolor oriental shorthair. The bicolor is any one of the accepted oriental shorthair color patterns with the addition of white to the belly, face, and legs/paws.