The Manx is a breed of cats with a naturally occurring mutation of the spine. This mutation shortens the tail, resulting in a range of tail lengths from normal to tailless. Many Manx have a small ‘stub’ of a tail, but Manx cats are best known as being entirely tailless and it is the distinguishing characteristic of the breed and a cat body type genetic mutation. 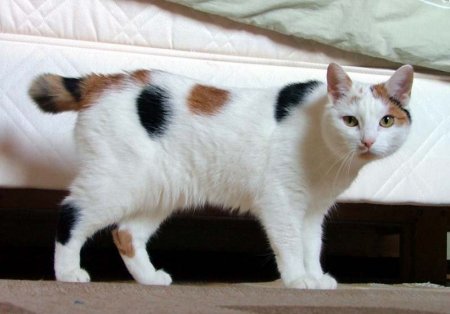 The Manx breed originated on the Isle of Man (hence the name), where they are common. They are called ‘stubbin’ in the Manx language.

They are an old breed, and these tailless cats were common on the island as long as three hundred years ago. The taillessness arises from a genetic mutation that became common on the island (apparently an example of the ‘Founder’ effect). The Manx tailless gene is dominant and highly transferable from generation to generation; kittens from Manx parents are generally born without any tail.

Having two copies of the gene is lethal to the animal and kittens are usually spontaneously aborted before birth in these cases. This means that tailless cats can carry only one copy of the gene. Because of the danger of having two copies of the tailless gene, breeders have to be careful about breeding two tailless Manxes together. Problems can be avoided by breeding tailless cats with tailed ones and this breeding practice is responsible for the decreasing occurrence of spinal problems in recent years.

There are various legends that seek to explain why the Manx has no tail.

In one of them, Noah closed the door of the ark when it began to rain and accidentally cut off the Manx’s tail, who’d been playing and almost got left behind. Another legend claims that the Manx is the offspring of a cat and a rabbit which is why it has no tail and rather long hind legs. In addition, they move with more of a hop than a stride, like a rabbit. This legend was further reinforced by the ‘Cabbit’ myth.

Recent postcards on the Isle of Man depict a cartoon scene of a cat’s tail being run over and removed by a motorbike, because motorbike racing is popular on the Island.

In appearance the hind legs of a Manx are longer than the front legs, creating a continuous arch from shoulders to rump giving the cat a rounded appearance.

Manx kittens are classified according to tail length:

* Dimple rumpy or rumpy – no tail whatsoever * Riser or rumpy riser – stub of cartilage or several vertebrae under the fur, most noticeable when kitten is happy and raising its ‘tail’ * Stumpy – partial tail, more than a ‘riser’ but less than ‘tailed’ (in rare cases kittens are born with kinked tails because of incomplete growth of the tail during development) * Tailed or longy – complete or near complete tail

Breeders have reported all tail lengths even within the same litter.

The ideal show Manx is the rumpy; the stumpy and tailed Manx do not qualify to be shown. In the past, kittens with stumpy or full tails have been docked at birth as a preventative measure due to some partial tails being very prone to a form of arthritis that causes the cat severe pain.

Manx cats exhibit two coat lengths. The short-haired Manx has a double coat with a thick, short under-layer and a longer, coarse outer-layer with guard hairs. The long-haired Manx, known to some cat registries as the Cymric, has a silky-textured double coat of medium length, with britches, belly and neck ruff, tufts of fur between the toes and full ear furnishings. The Cat Fanciers’ Association (CFA) considers the Cymric to be a variety of Manx and judges it in the short-hair division, while The International Cat Association (TICA) judges it in the long-hair division. Short- or long-haired, all Manx have a thick double-layered coat.

In health the pedigreed Manx cats today are much healthier and have fewer health issues related to their genetics than the Manx of years ago. This is due in part to the careful selection of breeding stock, and knowledgeable, dedicated breeders. Manx have been known to live into their mid to late teens and are no less healthy than other cat breeds.

Like any other cat, keeping Manx cats indoors, neutering or spaying, and providing acceptable surfaces for the cat’s normal scratching behavior are vital to lengthen the life of any cat.