The Siberian is a long haired breed of cat. Known to be an exceptionally high jumper, the Siberian is a strong and powerfully built cat, with well proportioned characteristics that include strong hindquarters and large stomachs. They typically weigh between 15-20 (6.8 – 9.1 kg) pounds for the males, or 10-15 pounds (4.5 – 6.8 Kg) for females. They are shorter and stockier than Maine Coon cats and Norwegian Forest Cats even though they can attain approximately the same weight. 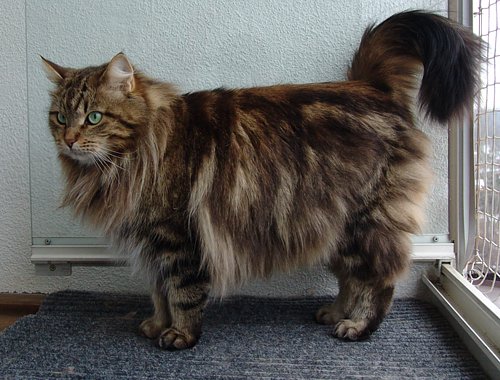 Siberians typically attain their full growth more slowly, over their first 5 years. The females weigh less than the males. They are extremely agile and athletic. Their muscles are mighty, outstanding and powerful. The back is medium and slightly lower in front than in the hind, but appears horizontal when in motion. A barrel shaped, muscular torso, develops with age. The hind legs, when straightened, are slightly longer than the forelegs. The paws are round, big and quite powerful. The overall appearance should be one of great strength and power; the facial expression is quite sweet. The general impression is one of roundness and circles.

Personality Siberians are generally intelligent, playful, affectionate and loyal,leading many to describe their character as dog-like. Their fur is plush, can have a wide range of coloration (including points), and does not have a tendency to mat. Siberian fur is also textured, medium-long and usually tabby patterned. Siberians have a triple coat. There should be an abundant ruff setting off the large, impressive head. There is a tight undercoat, thicker in cold weather. Allow for warm weather coats. The hair may thicken to curls on the belly and britches, but a wavy coat is not characteristic. The skin may have a bluish cast. Clear strong colors and patterns are desirable, but are secondary to type. When breeding on average, a Siberian cat’s litter consists of five kittens.

Ancestry While Siberians are a fairly recent introduction to the US(1990) and thus relatively rare, though popular, the breed can be seen in Russian paintings and writings hundreds of years old. This sets them apart from breeds that are the result of fairly recent selective breeding.

There is an increasing interest in Siberians worldwide. The Siberian breed is now recognized by most cat organizations, which accept Siberians of any color (including color points) for competition. This includes recognition in the major cat registries such as TICA and Cat Fanciers’ Association (CFA), as well as acceptance in the CFA Championship class beginning on February 6th, 2006.

Distinguishing FeaturesThe large, almost round eyes are at least one eye width apart with the outer corner slightly angled toward the lower base of the ear. There is no relationship between eye colour and coat colour/pattern, however, as with all pointed cats the eye color is blue with pointed colors

The ears are medium-large, wide and set as much on the sides of the head as on the top; ideal position is 1 to 1-1/2 ear widths apart. The tips are rounded and the ear tilts forward. Ear furnishings are desirable. Hair over the back of the ears is short and thin; from the middle of the ear, the furnishings become longer and cover the base completely.

The tail is medium length, wide at the base, blunt at the tip without thickening or kinks, evenly and thickly furnished.

The head is a modified wedge of medium size with rounded contours, broader at the skull and narrowing slightly to a full rounded muzzle with well-rounded chin. There may be a slight muzzle curvature, but the transition between the side of the head and the muzzle is gentle and inconspicuous. The cheek bones are neither high set nor prominent. There should be a good distance between the ears and eyes. The top of the head is flat, with a gentle nose curvature of a gentle slope from the forehead to the nose and a slight concave curvature before the tip. The neck is medium, rounded, substantial, and very well-muscled, siberians have the appearance of no neck.

There exists controversy concerning color point Siberians. Some consider them to be a separate breed called ‘Neva Masquerade’, but so far no major cat registry has accepted them as a separate breed. They are considered to be a color division of the Siberian breed.

The Rolandus Cat Fanciers …& others