Among the animals that the ancient Egyptians respected and venerated was the cat, and they named their Cat Godess ‘Bastet’.In legend the godess Bastet was said to be a sacred and gentle animal, with a long tail (often curled around one leg) and with rather long erect ears.The cult center for Bastet was at Bubastis (modern Zagazig) in the eastern part of the Nile Delta. The cat was also the patron deity of other sites in Egypt including Saqqara and Alexandria. Great temples and underground mausoleums for cats have been excavated at each of these sites. 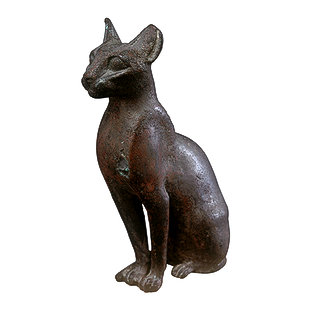 The Godess Bastet
This fourteen centimetre high statue of Bastet shows the goddess in characteristic Egyptian style. She sits with her forelegs upright, and her hind legs neatly folded under her. The ears are erect, and the eyes are big. The muzzle has some detail and the body appears to be strong.
Photograph: The Supreme Council of Antiquities, Egypt
Over 2000 years ago the cat-goddess was worshipped to such an extent that the bodies of dead cats were Mummified just like those of their human keepers. The Cats were placed in coffins and pious worshippers had bronze and stone figures made so that these could be offered in dedication to the God.Bastet was also the goddess of feasts, wine drinking, dancing, and music (so, Merry Christmas Folks!). She was assimilated with the goddesses Tefnut (now Norman is a tough Nut for sure, Ed.) and Sekhmet, and was considered to be the daughter of the sun god Re (or Ra). In this aspect, she was depicted with the head of a lioness.When the Romans came to Egypt, they too became cat lovers, and took both live cats and cat statues to Europe. This surely means that the moggies sitting next to us today are related to these majestic and worshipped cats of the Ancients….certainly in legend and very likely in the flesh too.

A stone carving of Bastet found in Alexandria in 2010
This stone sculpture was one of many found among the temple’s ruins in the Kom el-Dekkah area of the Mediterranean port city of Alexandria in 2010. Archaeologists say the Ptolemaic temple dating back more than 2,000 years may have been dedicated to the ancient Cat Goddess.
Photograph: The Supreme Council of Antiquities, Egypt