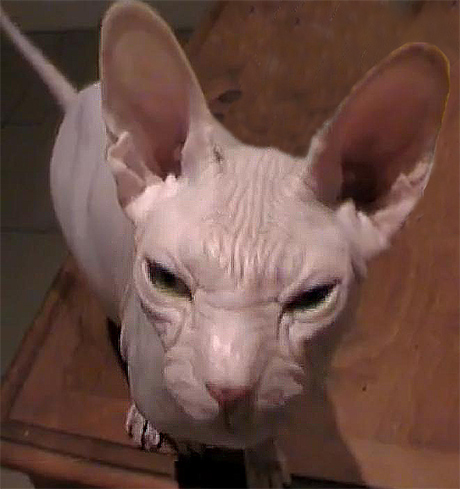 Kohana Cat, so very rare.
Photograph: extracted from Youtube Channel video (by valmara1971). [The photo has been digitally enhanced.]
The history of the Kohana Cat is vague to say the least (or at least I’ve not found much information so far … ). Rumour has it that this intriguing creature is the result of a genetic mutation of cat breeds originating on the island of Hawaii. There are only somewhere in the region of 20 of these felines alive in the world today.Kohana’s have absolutely no hair on their body apparently. Not having seen one in the flesh I’m just going to have to take that as true. This cat it seems has no hair follicles so hair cannot grow, and what is more this renders the skin texture somewhere between old human skin and damp rubber.Other distinguishing features are quite a lively temperament, very large ears and long sinuous rat like tail. This cat is still a beauty in my book. Note: the cat pictured (from a short video)is called maggot and apparently he has a brother called Beetlejuice, the story continues …