Skip to content
It’s official! Hercules the Liger is the Largest cat in the world, and what a beautiful creature he is, standing an amazing six foot to the tips of his ears! 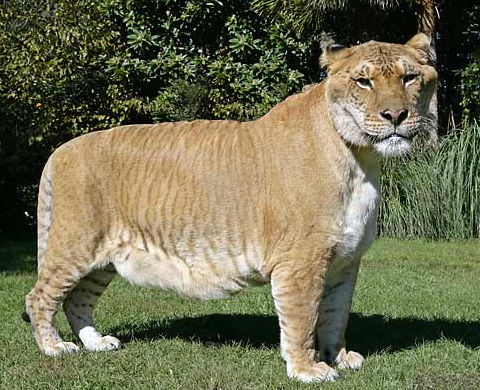 Hercules the Liger ~ The largest cat in the world
Photograph: Splash News
Hercules is indeed a massive and sturdy beast, being the largest living liger. If fact he is also recognized by the Guinness Book of World Records as the largest living cat on Earth, at 6 foot tall and weighing in at over 410 kg (904 pounds or 64 stones). He is a completely healthy and lively cat and is expected to live a long life. (how would you like to get in a play fight with him, eh Ed? (Norm). Hercules and his brother Aries (born in 2010) are both being raised at Myrtle Beach Safari Park wildlife reserve in South Carolina. It is said that the breeding of these large cats was (in this case) a complete accident. Many Believe that the interbreeding of different species of cat (or any animal for that matter)is not to be encouraged as it can cause medical disorders in the offspring. Long ago (in 19th century India) ligers were first discovered in the wild (born out of encounters between Lions and Tigers when the territories and breeding grounds of these big cats overlapped). Today no such wild ligers are known to exist. So then, Ligers are a cross breed between a male lion (Panthera leo) and a tigress (Panthera tigris). Just like their mothers (Tigers) Ligers love to swim, and like their fathers (Lions) they are very sociable and playful. Notably, ligers typically grow larger than either parent species (unlike Tiglons which tend to be about the size of a tigeress). 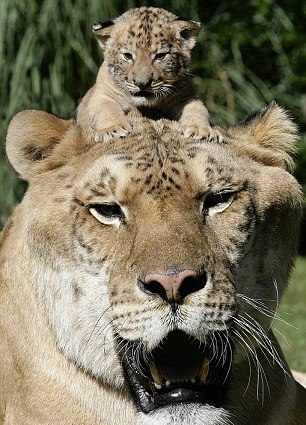 Tiny Aries, standing on the head of his brother Hercules – Today Aries will be almost as big as his brother
Photograph: Splash News