Skip to content
The Donskoy (or Don Sphinx) is a highly intelligent, beautiful and friendly cat breed type which originated in southern Russia in the city of Rostov-on-Don (near the Sea of Azov) in 1987. 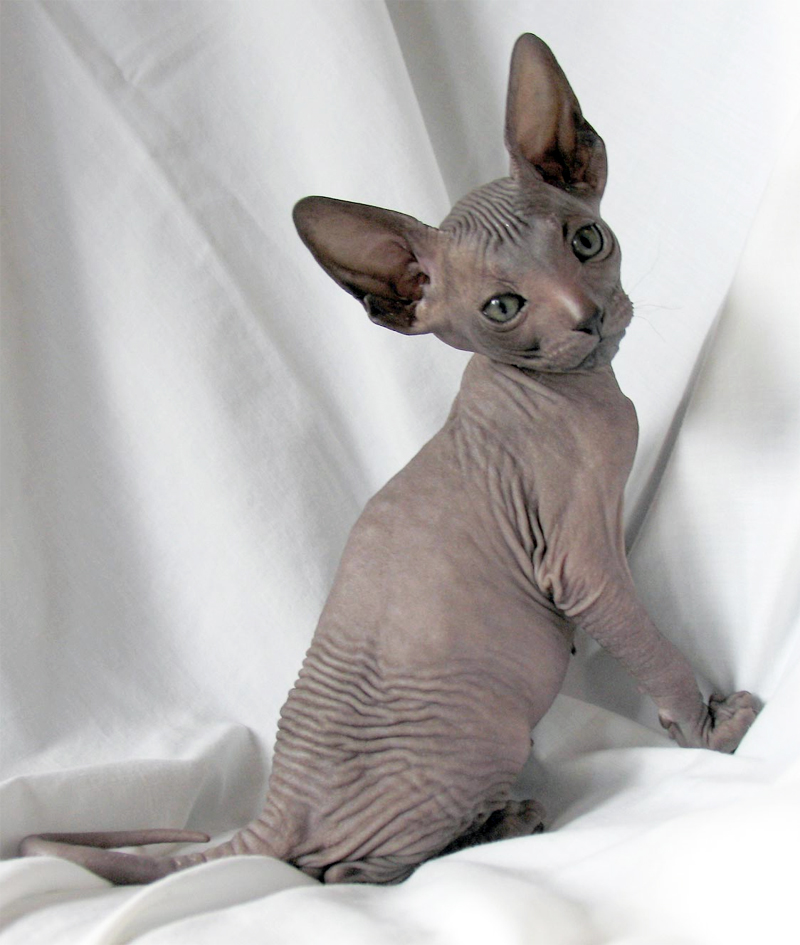 A young Donskoy ~ not always bald at birth
Photograph: petsphoto.com
The story goes that Elena Kovaleva, a professor of the nearby State Pedagogical Institute, saw some young boys playing with a bag. When she heard a kitten inside the bag squealing in fear and pain, Elena took the bag from the boys and brought the young kitten home. She named the kitten Varvara, but over the following months the kitten grew up like no other cat she had seen. It lost its hair and was treated (in vain) for this seemingly fatal condition. The cat thrived however and a few years later gave birth to both haired and completely hairless kittens. Strangely those kittens with hair also began to lose it, just as their mother had done years before. Many thought that these hairless kittens were unhealthy and should be gotton rid of. However, a local enthusiast and professional cat breeder by the name of Irina Nemikina, rescued one of these kittens and in several years had managed to breed a completely new type of Russian cat (a hairless one) which she named the ‘Don Sphynx’. ‘Don’ after the river which Varvara was found beside and ‘Sphynx’ because it was hairless just like the sphynx breed. It was The International Cat Association which gave this unique cat type the name of ‘Donskoy’. 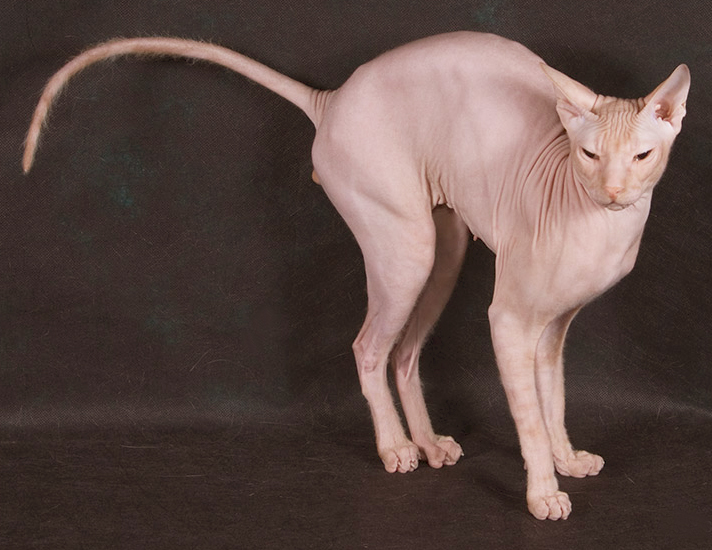 An adult Donskoy, a loyal and good-natured companion
Photograph: unknown
The Donskoy is a very elegant, highly inquisitive, and social cat. They are also very active and almost always extremely friendly. For owners the Donskoy is very loyal, good-natured, gentle, and easy to groom and handle. Their coats are warm and soft to the touch making then wonderful to hold and cuddle. They have a well balanced personality, show a lively interest in their surroundings, and enjoy making up & playing games. Donskoy are extremely affectionate and they have an irrepressible curiosity (even more evident than in other cats). Their social skills are also transferred to other animals to which they will offer companionship. It is recommended that these highly sociable cats are found companion pets and should not be kept in isolation with just humans. Owning a Donskoy you will find they will love to be a part of all your activities and they will be easy to train to follow your voice commands. A young Donskoy will have a coat of one of four types in a range of colours. All but one of these coats usually results in hairlessness in later life. This is due to the Donskoy carrying a dominant hair loss gene that causes their birth coat to fall out (if they have one) in later life. Their coats are: Rubber Bald — The rubber bald is born bald and remains that way throughout its life. Flocked – The Flock coat appears to be hairless and has the texture of soft chamois leather. The Flock coat can sometimes disappear and the cat can sometimes become bald. Velour – The velour coated kittens are born with a bald spot or Monk’s cap on the top of the head. Their wool-like coat becomes wiry and disappears gradually within the first year or so with some residual hair remaining on the face, legs and tail. The Velour can also completely lose their coat and become bald over time. Brush – Brush type coats lose only a portion of their coat over time. Their coat can be bristly, soft, wavy, and often wiry on their whole body with bald areas on the head, upper part of neck or on the back. The Donskoy is further unique in that it can grow a winter coat (fine wool on the chest and hairs on the end of the tail) which it will lose when the weather warms. Their skin is similar to human: it sweats when it is hot and it can also become tanned by the summer sun. 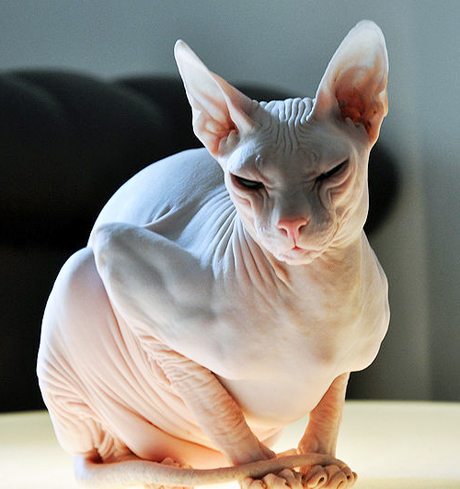 Donskoy’s have a marvellous appearance wouldn’t you agree?
Photograph: unknown
Donskoy are elegant, sturdy and muscular with strong boning. They are a medium-sized cat with soft hairless wrinkled skin that feels hot and velvety to the touch. Their skin is excessively elastic, with pronounced wrinkles on the cheeks, jowls and under the chin with vertical wrinkles separating their ears and running down the forehead, spreading into a series of lines above the eyes. Wrinkles are also found at the base of the neck, in the breast area, at the base of the tail, on the front and undersides of the legs, down the sides of the body to the underbelly and groin. Males as a rule are generally larger than females. The Donskoy is medium to medium-long in length, dense, muscular, strong-boned, with wide breast and croup. They have a deep groin-line with a well-rounded abdomen called a fatty belly where fat accumulates in the winter. Their body is almost pear shaped. The male has stud jowls, a thicker neck, wider shoulders, and a broader head than the female. The male is more muscular and gets significantly larger than the female. The front legs are shorter than their back legs yet are in proportion with their body. They have oval feet with long slender toes. Toes are very long, slim and distinguished with thumbs that bend inward rather than downward on the front paws giving the appearance of slender hands (like monkey fingers). Webs separate the long toes. Their tail is medium long, straight and tapers from body to rounded tip. The Donskoy was first officially recognized by World Cat Federation (WCF) in 1997, and by The International Cat Association (TICA) in 2005. The standard of points describes the cat as being medium sized and muscular, with large ears, almond shaped eyes and distinctive long, webbed toes. They require frequent grooming, in spite of their lack of coat. Also over-bathing can cause the skin to become very oily. The Peterbald breed was originally created by crossing Donskoy with Siamese and Oriental cats to create a hairless cat of Oriental type. Matings between Donskoy and Peterbald are no longer permitted however.