Skip to content
Two beautiful Cheetahs held in captivity at the Kragga Kamma Game Park in Port Elizabeth, South Africa, struck last weekend, and the trip of a lifetime to celebrate a Scottish woman’s 60th birthday, turned into a battle of life and death.

Don’t mess with a fully grown cheetah …
Photograph: Archibald D’Mello / AP Photo
The supposedly tame cheetahs attacked Violet D’Mello whilst her husband Archie looked on and, erm, took photos. Archie remarked afterwards “They seemed to be pretty docile. They said they were hand reared from cubs and were extremely tame and you could stroke them … and not only that, lay on them and they’ll do nothing to you”. The couple had just taken photos with the animals and were still in the petting area when one of the cats grabbed an 8 year old girl by the leg. Violet tried to stop the attack and allowed the girl to run for safety, but both cheetahs then turned on her in a savage attack that lasted for more than three minutes. Husband Archie kept taking pictures, documenting the horrific scene as the animals bit and scratched his wife’s head, legs and stomach. 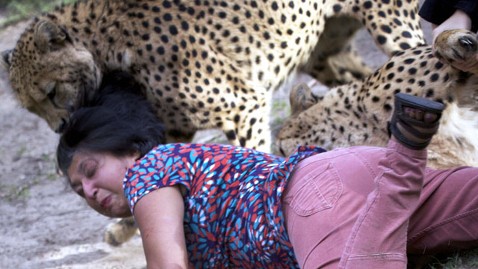 … or you’ll end up in the dirt
Photograph: Archibald D’Mello / AP Photo
Violet recounted the story to the Port Elizabeth Herald reporter. “… my instinct took over while a guide tried to pull the cats off of me. Something inside me just said, Don’t move,..don’t move at all. Don’t react, just play dead” The 60-year-old lost a lot of blood during the attack and has a lot of stitches on both her thighs and her scalp, her husband said. Park manager Mike Cantor told the newspaper, “the park had never had any problems with the previously beloved cheetahs”. It’s not something we’ve ever really experienced. It’s obviously very unfortunate, and we’re looking into what may have startled or riled up the cheetahs”. The petting facility is now closed to the public while the park investigates the attack.