A healthy Caracal cat is sleek, muscular and highly territorial.The Caracal is widely distributed across Africa, Central Asia, and south-west Asia into India. While it is relatively common, there is concern over the status of populations on the edge of its range in the Central Asian republics and in Pakistan. Its chief habitat is dry steppe and semi-desert, but it also inhabits woodlands, Savannah, and scrub forest. 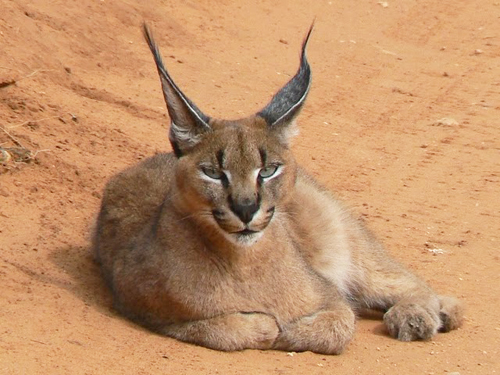 Caracal, related to the African Golden Cat
Photograph: themaxfiles blogspot.com
Caracal prefer to live in open country, but only where there are scattered bushes and rocks from which it can spring to ambush its prey. A fully grown male Caracal typically weighs 13 to 18 kilograms. Though classified as a small cat it is indeed a heavy animal.The Caracal has many aliases, being referred to as the African Lynx, Desert Lynx, Persian Lynx and Egyptian Lynx (and its head features in fact resemble the Eurasian Lynx), but it is not a member of the Lynx family at all! Besides, it has longer legs, shorter fur, and a slimmer appearance than a lynx.In Afrikaans the Caracal is a called the Rooikat or “red cat” whilst in North India and Pakistan it is locally known as “Shyahgosh” or black ears. The word “Caracal” comes from the Turkish (or the ancient Persian) word “karakulak”, meaning (you guessed it) “black ear”.

A Caracal Kitten Pleading with Mum for attention
Photograph: Wikimedia Commons
The Caracal is now believed to be (genetically) related to the African Golden cat and the Serval. Its distinguishing features are its very long ear tassels (which it moves using 29 different muscles to listen for and locate nearby prey) and eye pupils which contract to form circles rather than the slits found in most small cats.The Caracal has a range of fur colours from wine-red, through sand-coloured to grey and black (or Melanistic), sometimes all of which are found on a single animal. When young, Caracals have reddish spots on the underside but as they grow into adulthood they lose all markings except for black spots above the eyes and small white patches around the eyes and nose. Underparts of chin and body are generally white at all ages. The paws have numerous stiff hairs growing between the pads (these are said to help the animal walk on soft sand). This is particularly noticeable in the Turkmen Caracals. 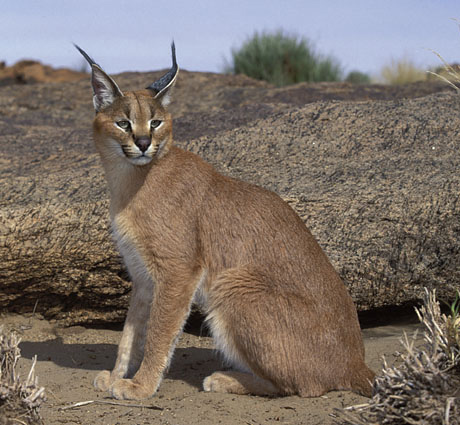 A Caracal in the brush
Photograph: no credit given
Other information:Conservation: Caracals are often viewed as vermin by farmers in Africa as they may prey on domesticated livestock such as poultry and young sheep and goats. Caracals are rarely seen in the wild despite their relative abundance, as they hide extremely well. Game drives in countries such as Kenya and Botswana widely encounter other animals, but a sighting of a Caracal is extremely rare. Listed as Near Threatened as it seems reasonable to believe that the species could have declined on the order of 20% over the course of the last 15 years across its range, due mainly to the impact of habitat loss, hunting and loss of prey base. Although there are no reliable density estimates, the total population almost certainly exceeds 10,000 mature individuals (IUCN Cats Red List Workshop 2007). Asian Caracals are on CITES: Appendix I, and African populations are on Appendix II. Fortunately, Caracals are not listed on the IUCN Red List.Behaviour and diet: Adult Caracals dwell either alone or, less commonly, in pairs. Females inhabit relatively small home ranges, varying from 5 to 57 square kilometres (1.9 to 22 sq mi), depending on the local availability of prey. While the females actively defend their territory against other females, the males roam over much larger areas of 19 to 220 square kilometres (7.3 to 85 sq mi) with considerable overlap. Like other cats, Caracals scent mark their territory. They leave their faeces in visible locations, and also mark territory by spraying urine onto bushes or logs, or raking it into the ground with their hind feet.

Close up of a Caracal, showing the round pupils
Photograph: Wikimedia Commons
Wild Caracals hunt by stalking their prey, approaching within about 5 metres before suddenly sprinting and leaping. They kill smaller prey with a bite to the nape of the neck (The jaw is short and full of powerful teeth), and larger animals by biting the throat and then raking with their claws. Caracals sometimes cover their larger prey if they cannot consume the whole carcass in a single meal. Some have even been observed to hide carcasses in trees (in a similar way to the Cheetah. The Caracal excels in its spectacular skill whilst hunting birds, being able to snatch a bird in flight, sometimes more than one at a time. It can jump and climb exceptionally well, which enables it to catch hyraxes better than probably any other carnivore. If no cover is available in which to conceal itself, a Caracal may flatten itself against the ground and remain motionless, allowing its coat colour to act as camouflage.Communication: Caracals produce the usual range of sounds for cats, including growling, hissing, purring, and calling. Unusually, they also make a barking sound, which is possibly used as a warning.Life span: Its life expectancy in the wild is 12 years, and 19 years in captivity. The Caracal may survive without drinking for a long periods (this water demand is satisfied with the body fluids of its prey). Since it is also surprisingly easy to tame, it has been used as a hunting cat in Iran and India. Today Caracal cats are increasingly kept as pets as they seem to adapt to living with humans.Statistics: Body length: 55-90cm, Tail length: 22-31cm, Shoulder height: 38-50cm, Weight: male: 13kg to 18kg, female: 10kg to 13kg. Caracals from India tend to be smaller than those from Africa.Diet: Caracals hunt by stalking prey including rodents, hares, hyraxes, small deer and other small mammals. They are renowned for their expert ability to catch birds, leaping high into the air and hitting the bird with their paw. Reptiles and invertebrates are also taken. On rare occasions they have been spotted caching food up in trees.Behaviour: African Caracals are most active at night but will also hunt during the day in the winter. Asian Caracals are active at dawn and dusk and are highly inquisitive. They shelter during the day in disused burrows, dense vegetation or rock crevices. The maternal dens are located in porcupine burrows, rocky crevices or dense vegetation. Caracals are ground-dwellers but can climb well. Males have larger ranges than females.Reproduction: Mating may occur at any time of year; however, it is more likely to occur when prey is plentiful, which stimulates estrous in females. The estrous cycle lasts two weeks, and is marked by the female spraying urine containing chemical cues advertising her receptivity to neighbouring males.The female typically mates with several males over the course of a number of days. In some areas, males have been observed to fight aggressively for access to females and to remain with one for several days to guard against rivals; in others, they appear to be less protective. Copulation can last from ninety seconds to ten minutes.Gestation lasts from sixty-one to eighty-one days, and litter size ranges from one to six kittens. For litters born in their natural environment, the maximum number of kittens is three; however, larger litters are more likely to occur in captivity where nutrition needs are adequately met. Before birth, the female prepares a den in a cave or other sheltered area, sometimes using the abandoned burrows of other animals. At birth, the kittens are blind and helpless, weigh 198 to 250 grams (7.0 to 8.8 oz), and have yellow to reddish brown fur with black markings. The eyes open at around ten days, and the deciduous teeth have fully developed by fifty days. The canines are the first permanent teeth to appear, at around four or five months, with the others following over the next six months.Kittens are able to leave the birthing den at around one month old, and at about this time the mother will begin regularly moving them to new locations. Kittens are weaned at about ten weeks, but may stay with their mother for up to one year, when they start to reach sexual maturity. Life expectancy in the wild is twelve years, and seventeen years in captivity.