The Pallas cat is a native of wide areas of Asia and has adapted to a life at high altitudes where the air is thin and extremely cold! The animal has thick, long, coarse fur and low-set ears to protect against the cold. The fur colour can range between sandy red through yellow to grey in base colour with white tips to the fur guard hairs. This gives an overall ‘frosted’ appearance to the animal. 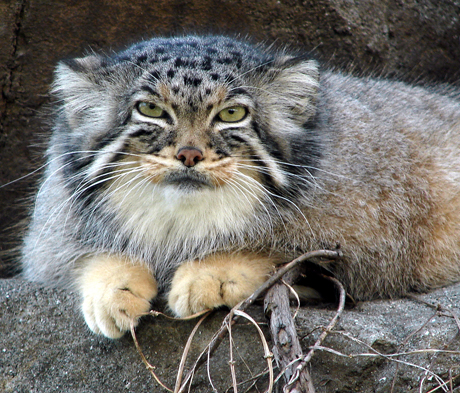 Fully grown Pallas Cat in captivity
Photograph: Under Creative Commons License
The legs of the Pallas are short and stumpy compared to the overall body size. The head is broad with high set eyes, which uncommonly contract to small circles rather than slits as in other small wild cats. The head is covered by a white striped facial ruff. From this an elongated snout has long whiskers with and a white ‘beardy’ chin below. The ears are low set and are also fur covered. The tail of the Pallas cat is tipped with black and has darker rings toward the end, similar dark markings can also be faintly seen across the side of its back. 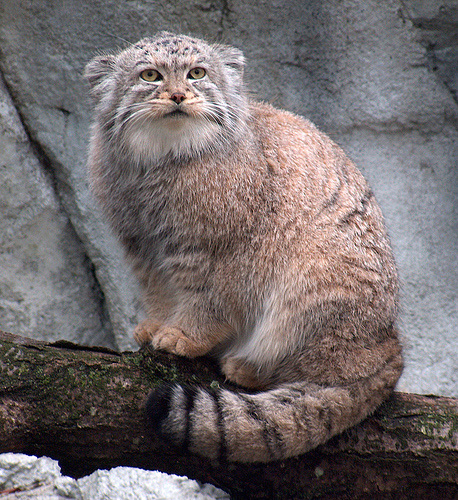 Strange but beautiful Pallas
Photograph: Muzina Shanghai – Under Creative Commons License
A full grown Pallas can reach 65 centimeters in body length with an additional tail length of 20 to 30 centimeters. The weight of a full grown animal will be in the region of 3 to 5 Kgs.Pallas cats have been known to live to an age of over 11 years in regions all over central Asia, through Iran, Pakistan, Kashmir, Nepal, Tibet and across to Western China.Within these regions they inhabit steppe, desert and barren rocky mountain areas up to high altitudes (over 4,000m). In such cold regions their thick fur provides good insulation.Pallas cats are elusive and solitary nocturnal hunters, feeding on small mammals, such as pikas, rodents and birds. They are usually most active at dawn and dusk into the night hours. During the day the cat uses caves, burrows and rock fissures in which to sleep. These ‘dens’ are often the old burrows which other animals have discarded.[teaserbreak] 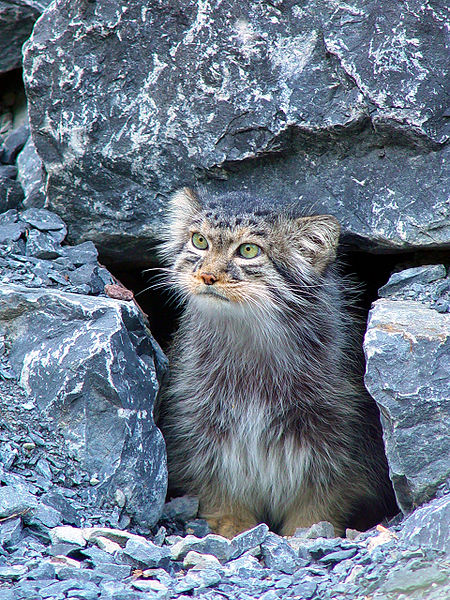 A Wild Pallas at a cave mouth
Photograph: K. Sturzenegger – Under Creative Commons License
When reproducing Pallas cats give birth to five or six kittens after a gestation period of 66-67 days.Pallas cats were formerly hunted in large numbers for the fur trade and thus today the Pallas cat is rare and is considered threatened on parts of its range. It is listed in CITES in Appendix 2. 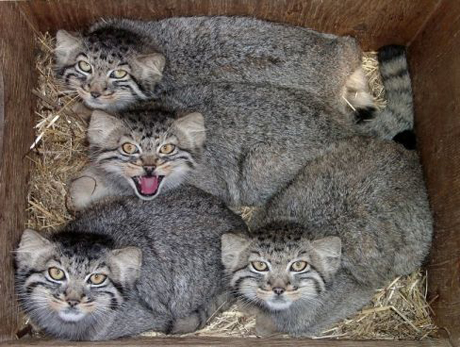