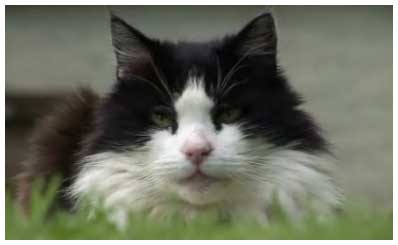 Casper, What a fascinating creature he was!
Casper, the 12-year-old black and white cat, who used to ride the bus with commuters regularly, has died. His death was announced on a notice put up at Casper’s bus stop by his owner. We are so sad to hear this news. His owner wrote “Many local people knew Casper, who loved everyone – he also enjoyed the bus journeys….he was a much loved pet who had so much character. Thank you to all those who befriended him.” I’d like to add a heartfelt goodbye to this amazing animal, who’ll live on in our hearts The bus service operators ‘First Devon and Cornwall’ said it was “devastated” by the cat’s death. Casper’s owner, 55-year-old Susan Finden, who re-homed him from a rescue center in 2002, said he had always been a free spirit. He was named after the cartoon character Casper the Friendly Ghost, because of his habit of wandering off. Casper died from injuries sustained after being hit by a car and will be greatly missed. Mrs Finden posted a tribute to Casper on the local Herald newspaper website and thanked First’s bus drivers for looking after her pet so well. The website has also received tributes to Casper from around the world, including the US and Australia. The bus company said many of its drivers had expressed sympathy for Casper to Mrs Finden. In a statement, a company spokeswoman said: “Casper touched many people’s lives and clearly had a very exciting life – traveling around Plymouth and who knows where else. “I suspect he’s now exploring heaven and is telling all the other cats up there about the many adventures he had.” A picture of the cat will continue to be used on one of the company’s buses. R.I.P Beautiful Casper