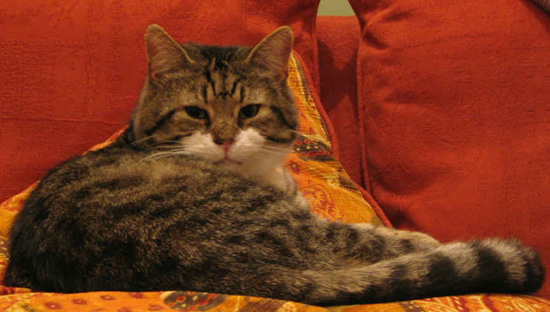 Ah, Back home again
Well, I’m here again reader, just back from my trot around the patch, and ready to tell some more about what I’m about and where I came from…. Did I tell you I’m four years old and have lived with my owners for exactly one year now. It was such a relief to get out of the cat protection shelter after six months. Those people in there are fabulous, they really try to do a good job of caring for you (you get food and fuss sometimes and all that). My one complaint is there’s no room to move in a little 80 x 200 cm (thats metric) cage. And your joints and bones get stiff, even when you’re young like me. We got about half an hour a day to walk around in a bare yard, you know, no trees or long grass to lie in (and stalk a bird or two). I know its cruel of me but you see it’s all built into my nature, so I can’t help that now can I? o.k. That’s the moan over with, on with the tale…[teaserbreak] How I ended up in the shelter was a whole heck of a mix up really. Like a tangled ball of wool it was! I had lived in a flat with a nurse but because I was out and about a lot (as we Tom cats like to be…mmm yes) when she moved out I got left behind. Well what a cheek I thought! You’d think she’d have remembered me after all those nights of fuss and purring and licking her hand and all. I’d always been a good cat for her, ate my food, settled down early and caught the odd mouse which I’d leave as a present outside her door, just to show her I was a good un. Out on my own I began to drift for a bit, picking up scraps here and there and sleeping under sheds and pine trees, but my luck was about to change. A kind lady down the next street left out some cheese for me. I cleaned the plate, and you can bet I went back to that door soon after, for another fill up. Before I knew it I was sitting in front of her gas fire watching the TV. Her kindness seemed to wear off after two weeks though, when she went and had me neutered. After a strange ride in a car it was ow! did that hurt (now for those of you who never heard of this, or what it does – neutering is what stops you wondering around and causing trouble with the lady cats in the neighbourhood). Things got even worse after this as I went into a sulking, skulking mood and began bossing her other two cats around so much they wouldn’t come into a room with me. Ooops, I went and did it again. So ‘kind lady’ wasn’t so kind after all, although when she packed me off to the home she did put all my toys into a box so that my next owners would be able to play with me. Talking of next owners that’s them now telling me to pack it up for the evening and get into my box. It’s cosy in there but you can’t see much. Much prefer the back shelf, you know the one above the radiator. You can see all kinds of stuff passing through in the moonlight. Anyway, I’m off there right now so until next time,… Norm.