Reported in the National Geographic News in August 2007, a remote camera captured this image of the elusive Chinese mountain cat at about 12,300 feet (3,750 meters) on the edge of the Tibetan Plateau in China’s Sichuan Province.A total of eight images of the feline (using a camera triggered by the body heat of the animal), represent the first time the mountain cat has been photographed in the wild, said Jim Sanderson, a cat specialist with the Wildlife Conservation Network who has been studying these animals for the last four years. Jim led the team that snapped the rare shots.Sanderson is hoping that the new images will reveal some of the secretive habits that have kept the creature a mystery to scientists for nearly a century. 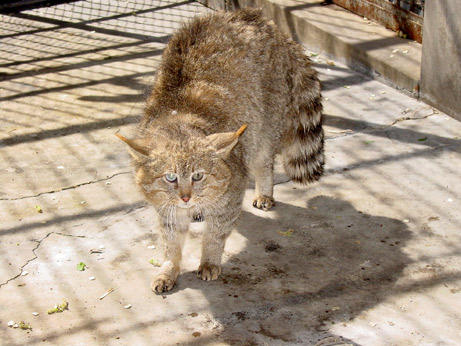 Captive Mountain Cat
Photograph: Beijing Zoo
Another image (above) of this species of cat has been taken at a zoo in Beijing. This cat has taken a defensive posture in fear of its captors.The Mountain Catcat’s long, dense coat and thick underfur protect it from harsh Tibetan snowstorms, but such defenses are useless against local hunters, who covet its pelt.“Until now, even cat specialists had only seen this animal as skins or in less than perfect shape in zoos”, said Jim, “These [new camera-trap] pictures will call attention to one of the rarest and most beautiful small cats.”