Skip to content
The Korat is one of the oldest stable breeds of cat. Originating in Thailand, it is named after the Nakhon Ratchasima province, although in Thailand it is often known as Si-Sawat, which means good fortune. In fact they are often known colloquially as the “Good Luck Cat” and are given in pairs to newlyweds or people of high esteem as a wish for good luck. Korats are a rare feline, even in their native Thailand, and remain the most highly prized cat of the Thai people; who think of the Korat as their national cat, (not the Siamese, as you might think). The first known written mention of the Korat was in “The Cat-Book Poems” authored between 1350 and 1767 AD in Thailand, now preserved in the National library in Bangkok. They first appeared in America in the 1950s and arrived in Britain from there in 1972. 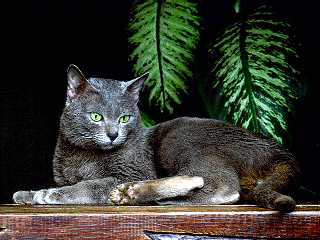 Korat – “known to form strong bonds with humans”
Korat cats are a shorthair breed with a small to medium build and a low percentage of body fat. The Korat is a slow maturing, medium sized cat with a smooth curved body and a heart-shaped face. The eyes are large and are luminous green in colour. The body is semi-cobby muscular and firm, with a blue coat well tipped with silver. The Korat can be a very vocal cat, but this does not usually indicate aggression. They are surprisingly heavy for their size and are highly active. They can form strong bonds with people.

As a final Note, Jean Johnson first introduced Korats to the US in 1959. She had lived in Thailand, where she first encountered the breed. Her first pair were named Nara (male) and Dara (female).