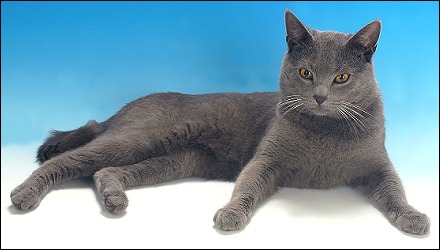 Physically, the Chartreux is large and muscular, with short fine-boned limbs, big paws, and very fast reflexes. They have been described as “potatoes on toothpicks”. They are known for their blue/grey water-resistant short hair double coats and thier gold or copper-colored eyes. Chartreux cats are also known for their ‘smile’ due to the structure of their heads and their long, tapered muzzle, they often appear to be smiling. Chartreux are exceptional hunters and were highly prized by farmers. Patellar luxation is a common weakness in the breed which responsible breeders screen for.

Legend has it that the Chartreux’s ancestors were feral mountain cats from what is now Syria, brought back to France by returning Crusaders in the 13th century, many of whom entered the Carthusian monastic order. The first documented mention of the breed was by the French naturalist Buffon in the 17th century. The breed was largely decimated during the first World War and wild populations were not seen after World War Two. A concerted effort by European breeders kept the breed from extinction. The first Chartreux were brought to the USA in 1971 by Helen and John Gammon of La Jolla, California. There are fewer than two dozen active Chartreux breeders in North America as of 2007.

Chartreux cats tend to be quiet, rarely making noises such as mewing or crying, and some are mute. They are quite observant and intelligent, with some Chartreux learning to operate radio on/off buttons and to open screen door latches. They take about two years to reach adulthood. Chartreux cats are playful cats well into their adult years; some can be taught to fetch small objects in the same manner as a dog. Chartreux are good with children and other animals. They are non-aggressive and affectionate, good travelers, and generally very healthy. Chartreux tend to bond with one person in their household, preferring to be in their general vicinity (often following their person from room to room), though they are still loving and affectionate to the other members of the household.