Skip to content
The Australian Mist (formerly known as the Spotted Mist) is a breed developed in Australia in the late 1970s, hence its name. The breed was developed by crossing the Burmese, Abyssinian, and Domestic shorthair cats to create a shorthaired cat with a spotted coat. The name was changed from ‘Spotted Mist’ to ‘Australian Mist’ in 1998 when cats with marbled coats, rather than spots, were accepted as part of the breed. 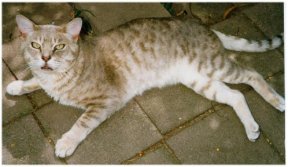 Australian Mist (spotted mist)
Australian Mists are medium-sized shorthaired cats, with a round head and large, expressive eyes. The coat patterns have three levels of definition;Australian Mist are excellent mothers, moderate breeders, and superlative studs. Desexed cats, females and kittens fit in easily with all sorts of other pets. Their conviction that no person or animal could do anything but love them leads to ease of integration with any but the extremely aggressive. Temperament is such that even many males are able to live in small groups with other males.. To further increase the pleasure of the small breeder, later maturation of both males and females is being selected for.The people centredness of Australian Mist contributes to their ability to be wholly indoor pets, and their willingness to remain indoors between dusk and dawn. While it is not possible to alter the inherent behaviours which enable the cat to hunt, these characteristics can be redirected towards interacting with people. Selection is continuing to enhance further these qualities, creating a truly companionable pet, which quickly becomes a member of the family.Australian Mist make excellent pets for children, even very young ones, as they are very tolerant of handling, and disinclined to scratch. As kittens they are lively, but sober up somewhat on maturity. Their propensity to crawl into the nearest lap with or without invitation, and to constantly hang around to see what people are up to makes them an excellent companion for the home worker, and the invalid. Older cats in need of rehoming are available at times. These cats settle in well, and are often preferred by older, or working buyers.As a relatively new breed, all Australian Mist catteries are in Australia, however desexed cats have been introduced to America and several other countries. The breed is now accepted for Championship status by the World Cat Federation.The Australian Mist celebrated 20 years as an accepted Championship breed in Australia in 2006.