Skip to content
The American Shorthair is the most popular breed of cat in the United States. The breed is believed to be descended from English cats (the forebears of today’s British Shorthairs) brought to North America by early European settlers to protect valuable cargo from mice and rats. 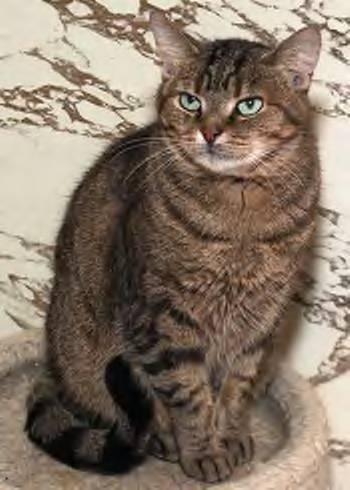 American Shorthair. The most popular breed of cat in America.
American Shorthair cats are medium to large sized, with powerful legs and strong paws. Their muzzle is squarish. Their coat is short, with the fur being thick, dense, and stiff to protect them from cold, moisture, and superficial skin injuries. Their coat thickens up in the winter and sheds in the spring but still remains lighter and slimmer than its close cousin, the British Shorthair.American Shorthairs are very affectionate, long-living, and disinclined to behavioral problems; they get along well with other family members, including dogs. The American Shorthair is also an excellent hunter, but its sunny and gentle disposition makes it ideal for families with small children. Shorthairs tend to get overweight very easily.An American Shorthair is not considered fully grown until 3-4 years old, when it attains the true strong athletic proportion of its breed. Males are usually larger than females and whole males have definite jowls. It is perfectly happy as an indoor or outdoor cat.American Shorthairs come in over 100 different varieties of colors (blacks, whites, silvers, creams, reds, browns, blues, bicolors, tabby or solid), but their eyes, pad color, and nose will always match their coloring. Their tail tapers to a blunt tip and has no kinks.Grooming for an American Shorthair is extremely easy, all they require is regular brushing and a wipe over with a damp chamois will make the coat shine. During shedding seasons using a good shedding comb weekly helps prevent hairballs.The American Shorthair makes a great pet because of its gentle temper, and because it gets along well with other family members, it makes a great pet for small children.

Link to one of many American Shorthair websites