The Raas cat is a native animal on the Indonesian island of Raas in East Java. The Rass Cat is also known as a Busok or Buso Madura (or just Madura) cat. It is said that the Raas cat is from a pure breed line without mixed genes from other cat races. However this cat is not yet recognised by Tica as a cat breed.

Raas village cats are considered very special and are highly protected by local inhabitants who, it is said, prevent export of these cats from the island shores. They are known to the islanders as either “Cat Buso” (grey cat), or “Cat Madura” (blue cat). It is believed the blue-gray or Maew Boran stock had been taken to the island on trading ships many years ago.

The Madura breed is now in decline and this has been documented in a study carried out by Lesley Morgan (ACF – Australia) and Dr. Ronny Rachman Noor (Faculty of Animal Science, Bogor Agricultural University). The study also concluded that these cats may be descended from the Korat cat breed and that they are now a closed colony of bobtailed blue cats. It appears that the declining numbers of cats of this type on both Raas and on Madura suggest a high degree of in-breeding and weakening of the breed. A further trait of these cats is that some have cinnamon coat color. These are rarer to find and known as Amethyst Raas. 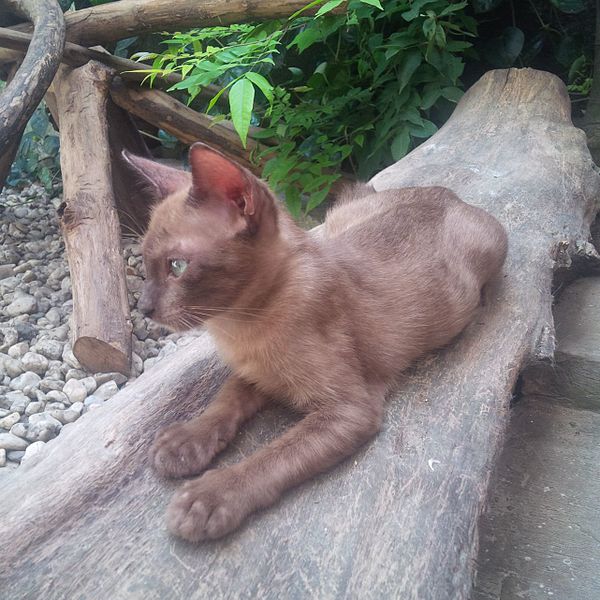 Amethyst Raas Cat.
Photograph: Indonesian Wikipedia, GFDL
The study continues: ‘…the cats posture and the triangular facial shape are similar to the ‘leopard’. The cats are large with a medium length tail with a visible bend or kink at the end. The true Madura cat (buso) is solid gray often with lavender nose leather. A few so-called Madura cats found on Madura Island have brown sepia, mink and colourpoint patterns as well as blue bi-colours. This is due to mating with local cats in the region’. The study goes on to mention the variety of cross-bred cats found on the surrounding islands, including; Korat, Burmese, Tonkinese (mink) and Siamese. Each of these had kinked tails typical of the Raas cat which further shows that cross breeding has occurred. 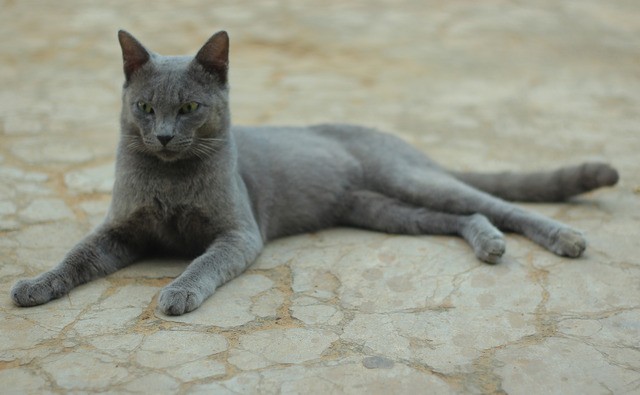 There are several myths surrounding the Raas breed. It is said that:

For more information on the Raas cat visit the official Site of the Raas Cat. Please note that a web page translation may be required.