It’s Nyan Nyan Nyan day (that’s "meow meow meow" if you’re English speaking), and so Cat Day has come and gone again. This celebration has been held in honor of cats, for over 30 years now!

The Japanese celebration of Cat Day happens on the Twenty Second of February each year. It seems that many Japanese people are just cat crazy. They seem to show so much love for this creature…and why not indeed?

The date was decided upon after an executive cat day committee polled 9,000 cat lovers. The majority voted that the date ‘February 22nd’ (or 2 – 22, and pronounced "ni ni ni" in Japanese), was the best candidate for a new cat day, as it was this date which most sounded like the words "nyan nyan nyan".

Japanese people marked the big day this year with millions of cat-loving posts on social media. Feline selfies, cat-shaped cakes and snacks, cat capers and moggy-themed costumes were amongst the images and videos which flooded the internet. It is true that like many countries Japan’s people have lived with cats for centuries, but Japan seems to be in a special place when cats are concerned. Below is a short list of Japans Nyan, Nyan, Nyan: (all derived from the archives of a certain trusty search engine * ) :

There’s the maneki-neko (in japanese, "a beckoning cat") – a well known Japanese ornament, lucky charm or talisman) which is often believed to bring good luck to the owner. These figurine depict a cat (traditionally a calico Japanese Bobtail) beckoning with an upright paw.

You can see them in the entrances of shops, restaurants and other business premises. Some of the sculptures are electric or battery-powered and have a slow-moving paw beckoning. The maneki-neko is sometimes also called the welcoming cat, lucky cat, money cat, happy cat or fortune cat, or "fist bump" cat in English.

Hello Kitty or ‘Kitty White’, is a fictional character produced by the Japanese company Sanrio, created by Yuko Shimizu and further designed by Yuko Yamaguchi. She is depicted as an anthropomorphic white Japanese Bobtail cat with a red bow. Initially known only as "the white kitten with no name" it is said in the ‘folk law’ of this animal born in the suburbs of London, England, on November first. She is "five apples" high and weighs "three apples". She is portrayed as a bright girl with a kind heart, very close to her twin sister Mimmy. She is good at baking cookies and loves Mama’s homemade apple pie. She loves to collect cute things and her favorite subjects in school are English, Art and Music. 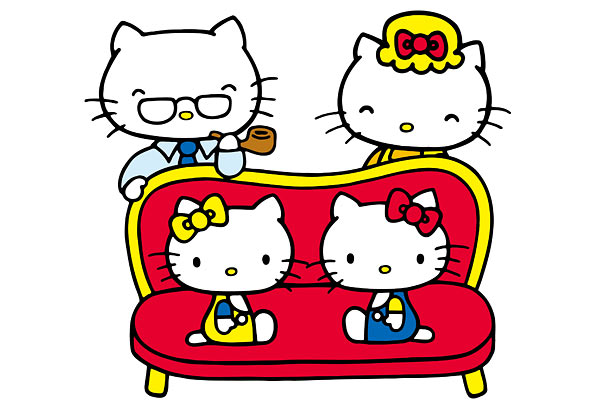 Then there are Cat Cafés’. The first known cat café was opened in Taiwan. It’s said that a Japanese tourist took the idea back to Japan, with the first Japanese cat cafe opening its doors in Osaka in 2004. Many apartments in Japan forbid pets to be kept, so cafes such as these provide a way for busy business men/women to be with animals for recreation, and as a way of offsetting the stress of modern life. In Japan, there are already over 150 cat cafes – such cafes are now appearing in countries all over the world. 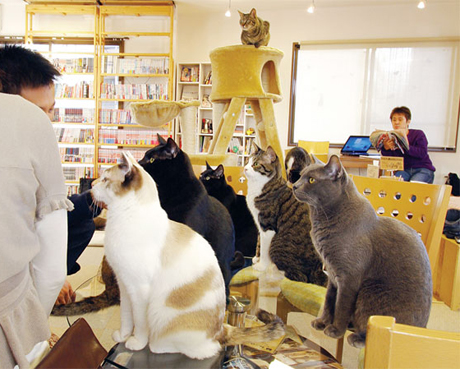 A cat cafe simply overrun with felines… and who’s king of the castle?
Photograph: © https://www.vice.com

How about the so called ‘cat paradise’ Aoshima Island. The mile-long island of Aoshima in southern Japan today has a whole town of feral cats which outnumber humans six to one. 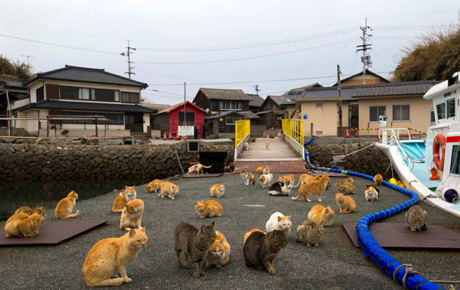 Cats on the Dockside. Any spare fish mister?

These cats were originally introduced to deal with mice that plagued fishermen’s boats. Numbers have now increased (last count over 120 cats). The cats of Aoshima are not fussy eaters (as you can imagine), surviving on the rice balls, energy bars or potatoes they entice tourists to give them. With no natural predators on the Island they are free to roam this seemingly Island paradise. 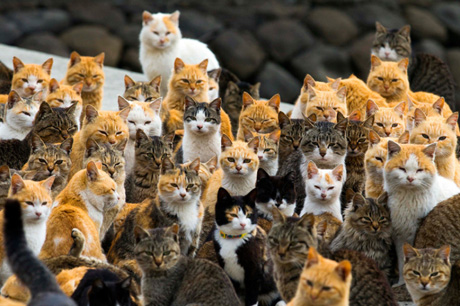 So many beautiful faces …and mouths to be fed!