Skip to content
Beautiful cat Tama-Chan who became famous across Japan after becoming an honorary stationmaster at a train station in Kinokawa, Wakayama Prefecture, has died at the age of 16. A spokesperson for Wakayama Electric Railway Company, stated that Tama died of acute heart failure.

Tama had been cared for by owners of a convenience store located at Kishi Station for the past eight years. Tourists flocked from all over to catch a glimpse and a photograph of the unusual station attendant. She was credited with boosting the number of people travelling along the Kishigawa Line by 55,000, adding an additional 1.1 billion yen (£5.7 million) to the local economy. Over 3,000 people attended the elaborate funeral for Tama held on June 28th. Rest In Peace Tama, you were and still are a little treasure.

Wakayama Electric Railway President Mitsunobu Kojima thanked her for her achievement, and said Tama will be enshrined at a nearby cat shrine next month. Before Tama’s arrival, the local Kishigawa Line was near-bankrupt; and the station was unmanned as it had lost its last staff. Kojima said “appointing Tama as stationmaster was initially an excuse to keep the cat at the station. But she was really doing her job,” he said. “The rest was a miracle, and his company’s success story also gave hope for dozens of other struggling tiny local train lines”, he said. “Tama-chan really emerged like a savior, a goddess”. It was truly my honor to have been able to work with her,” Kojima said in his speech. Her success in the role resulted in an award from the prefectural governor of Wakayama in 2008 and a promotion to deputy president of Wakayama Electric Railway in 2013. Among those mourning her death was Yoshinobu Nisaka, who said: “Tama won a great popularity at home and abroad as a super star of tourism. At the news of her loss, I express my deep sorrow and great gratitude.” Tama will reportedly be succeeded by her feline stationmaster apprentice Nitama, but undoudtedly will never be fogotten.. 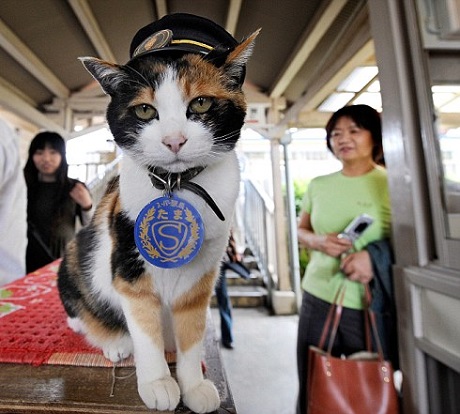