Mr Haywood … one handsome Moggy
Photograph: Simon Cox
Mister Haywood is a sturdy moggy with a penchant for other folks stuff! He certainly caught our eye here at Moggyblog Central, didn’t he Norm?Let’s let Simon Cox (Mr Haywood’s keeper) tell the story of this photograph (yesterday’s winner of the Guardian (U.K.) newspaper, cat photo competition)…..“Mr Haywood rarely sleeps in the same place twice and if you bring anything home, especially for the kids, he thinks it’s for him”.“The baby’s pram, a new laptop bag, shoe box etc, it’s all for him. Or in this case, the baby’s ‘Bumbo’ seat. It’s honestly not rigged up: I just walked in and found he’d squeezed his fat bum into the baby’s seat (I did put the cup of milk there for him)”. 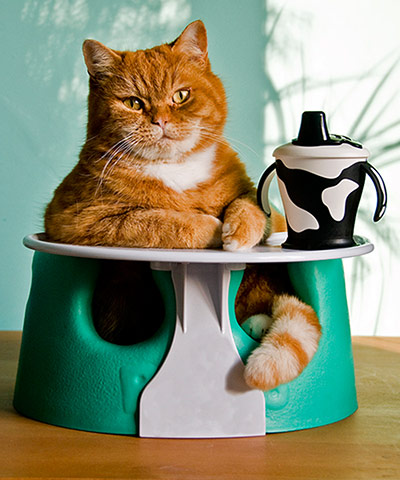 Mr Haywood, sitting pretty
Photograph: Simon Cox
“Had I tried to put him in it I wouldn’t be typing this, as he’d have had my fingers off!”“I think he decided that if this is how the baby gets fed, there was a good chance he might get a little extra attention!”