Skip to content
Reported in the National Geographic news today, 29th June 2009, the discovery of ten Lynx kittens, including the young cat in the picture below, marks the first time newborn lynx have been documented in Colorado since 2006. This is very good and encouraging news for the biologists overseeing the restoration of this mountain feline in the region.The tuft-eared cats with big, padded feet are native to Colorado, but were slowly eradicated up until the early 1970s by logging, trapping, poisoning, and development. They are listed as threatened on the U.S. endangered species list. 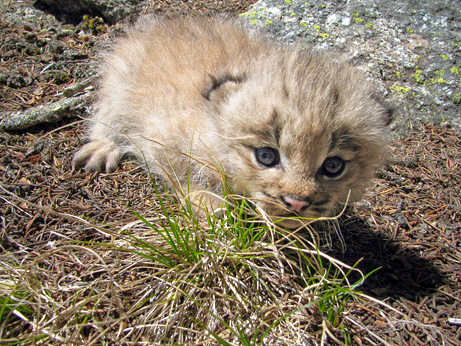 A tuft-eared Lynx kitten born in April 2009
Photograph: courtesy Colorado Division of Wildlife/AP
Biologists had found no kittens in 2007 and 2008, possibly partly because of a drop in the number of snowshoe hares, the cats’ main food sources.This year seven male and three female kittens have been found in five dens.More than 200 lynx from Alaska and Canada have been released in Colorado since 1999. Biologists don’t know how many lynx are currently in the state.