Skip to content
The ‘Persa’ descends from the Turkish Angora. The first specimens were imported into Italy from Persia around 1700; a century later, the breed was taken to France and England, where it was perfected with the addition of blood from Angoras, obtaining a silkier fur and multiplying the coat colors.

The Head of the Persa is broad, rounded and solid with protruding cheeks. The ears are small and well-spaced with long hair tufts. Jaw is generally thick and nose short. Body is compact, it should be 40 to 50 cm. long, with another 25 to 30 cm. of tail. It will be around 30 cm. high. Robust bone structure. Short, muscular limbs.

The tail is magnificently furry, ending in a tuft which provides weight to keep it hanging down.

The colour of Persian cats: Persians are classified into three groups: 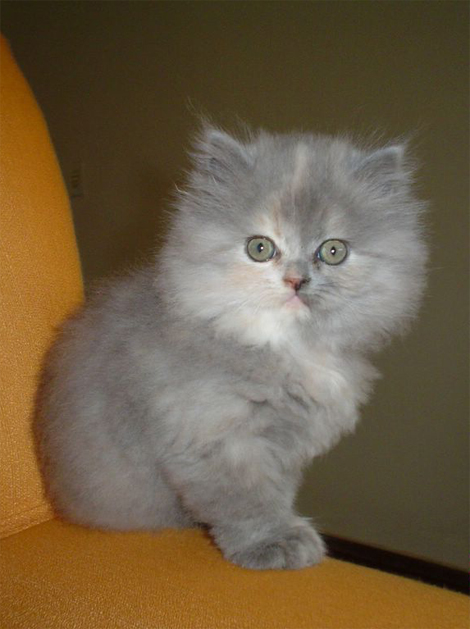 Persa Kitten
The Coat of a Persa is thick and silky, with collar ‘ruff’. The paws are also unusually furry. It is recommended to brush the coat with a strong bristled brush (metal brushes could break the fur) and to comb every day from six weeks of age. The source article recommended every fortnight, administering a malt or paraffin preparation orally to prevent the formation of trichobezoars (hairballs). Please check with your Vet before doing this. The Persa has a peacful and docile temperament. It is an intelligent creature and is not generally of a hunting nature.