Skip to content
The Selkirk Rex breed has highly curled hair, including the whiskers (vibrissae). Unlike the Devon Rex and Cornish Rex, the hair is of normal length and not partly missing, and there are longhair and shorthair varieties. Also unlike the other Rexes, the Selkirk gene is dominant. The Selkirk Rex originated in Montana, America in 1987, with a litter born to a rescued cat. The only unusually coated kitten in the litter was ultimately placed with a Persian breeder, Jeri Newman, who named her Miss DePesto (after a curly-haired character in the TV series Moonlighting). This foundation cat was bred to a black Persian male, producing three Selkirk Rex and three straight-haired kittens. This demonstrated that the gene had an autosomal dominant mode of inheritance. All Selkirk Rex trace their ancestry back to Miss DePesto. 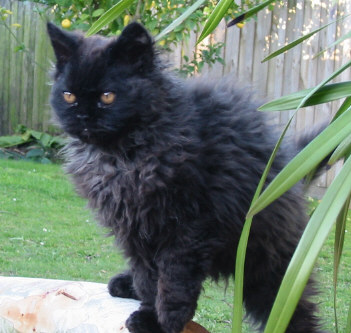 Selkirk Rex – with a curly coat
The breed has been developed in two coat lengths, long and short (medium). It is a large and solidly built breed, similar to a British Shorthair. The coat is very soft and has a woolly look and feel with loose, unstructured curls. The head is round, with large rounded eyes, medium sized ears, and a distinct muzzle, whose length is equal to half its width. An extreme break, like that of a Persian, is a disqualifiable fault. American Shorthairs, Persians, Himalayans, Exotics, and British Shorthairs have been used as outcrosses to develop this breed. The American Shorthair has now been discontinued as an outcross. In CFA, outcrossing to Persians (including Himalayans) is scheduled to be discontinued in 2010, and all outcrosses stopped in 2015. In Australia, all outcrosses are scheduled to be discontinued in 2015. The breed was accepted by The International Cat Association in 1992 and the Cat Fanciers’ Association in 2000. The breed is accepted in all colors, including the pointed, sepia, and mink varieties of albinism; bicolors; silver/smoke; and the chocolate and lilac series. This breed has an extremely dense coat and high propensity for shedding. Unlike other Rex breeds with reduced amounts of hair, the Selkirk Rex is not recommended for those who might be allergic to cat allergens. The temperament of the Selkirk Rex reflects that of the breeds used in its development. They have a lot of the laid-back, reserved qualities of the British Shorthair, the cuddly nature of the Persian, and the playfulness of the Exotic Shorthair. They are very patient, tolerant, and loving. There are no known health problems specific to the Selkirk Rex breed. They are a healthy and robust breed. Breeding towards proper head structure is necessary to prevent kinking of the tear ducts, resulting in tear run down the front of the face, or muzzle creases that can result in dermatitis on the face. Like other Rex breeds, irritation of the ear by curly fur can occur, increasing the production of ear wax. Homozygous cats (with two copies of the dominant Selkirk Rex gene) may have a tendency towards excessive greasiness of the coat, requiring increased frequency of bathing. Other health problems may be inherited from the outcross breeds used, including Polycystic Kidney Disease from Persians and Hypertrophic Cardiomyopathy from British Shorthairs. Responsible breeders screen their breeding cats for these diseases to minimize their impact on the breed.