Skip to content
This stunning cat sprang from the Burmilla breeding program that used the Burmese and Chinchilla Persians as its starting point. And today there are many cat clubs and breeders totally dedicated to developing this breed to the highest possible standard, and so it is a cat that has it all. 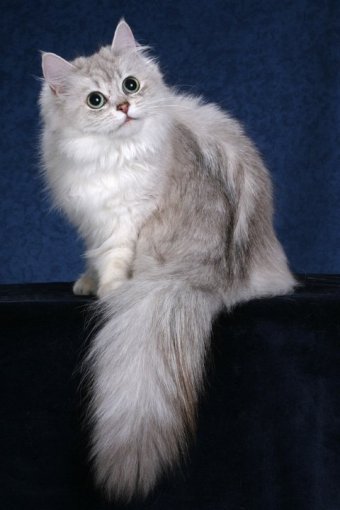 Tiffanie Cats ~ intelligent and affectionate
Photo: unknown
If you want a cat that combines beauty, intelligence and personality, and has the added benefit of a luxurious semi-long coat that does not tangle or matt then the Tiffanie would be the ideal animal for you. One of its most striking features, is its spectacular green eyes and the tipped and shaded varieties also display eye and lip liner that gives them such an appealing appearance too. The Tiffanie comes in five colours – black, brown, blue, chocolate and lilac. Most breeders speak highly of this animal’s fine temperament that hails from both sides of its ancestry. Some are more laid back similar to the Chinchilla, and some are more outgoing and demanding similar to the Burmese. For families, apartment dwellers, young couples and single people this is the ideal cat – in fact it will suit everyone. Similar to its Persian ancestors it is quite content to sit on a bed and preen itself in the mirror; but then its Burmese ancestry bubbles to the surface and it will want to be involved in non-stop play. These cats are extremely intelligent animals and they will often be waiting at the door for the children to arrive home from school or their owners from work, but you will then need to be quick with a cuddle or offer to play a game with them. The Tiffanie is also a cat that is exceptionally easy to train, is undemanding and is happy to live in most situations and will give years of loving companionship if treated with the love and respect it deserves.