Skip to content
The Somali is a long-haired Abyssinian cat. The breed appeared spontaneously in the 1950s from Abyssinian breeding programs when a number of Abyssinian kittens were born with bottle-brush tails and long fluffy coats. Abyssinians and Somalis share the same personality (active, intelligent, playful, curious) and appearance. The only difference between them is the fur length and therefore the amount of grooming required. Unlike most long-haired cats, Somalis shed very little excess hair. Their coat is generally shed en masse, or “blown”, once or twice a year, rather than constantly shedding like a Persian or other long-haired cat. 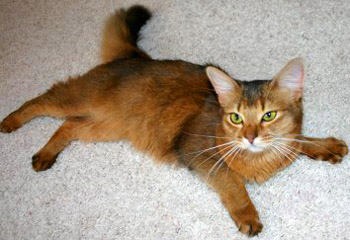 Somali. Long-haired Abyssinian cat
Somalis have a striking, bushy tail, which, combined with their ruddy coat, has earned them the nickname of “fox cats” in some circles. In addition to the fluffy tail, the Somali breed features a black stripe down its back, large ears, a full ruff and breeches, contributing further to the overall “foxy” look. Their coats are ticked, which is a variation on tabby markings, and some Somalis may show full tabby stripes on portions of their bodies, but this is seen as a flaw, and tabby Somalis are only sold as neutered pets. The only tabby marking on a show Somali is the traditional tabby ‘M’ on the middle of the forehead. Like Abyssinians, they have a dark rim around their eyes that makes them look like they are wearing kohl, and they have a small amount of white on their muzzles and chins/throats. White elsewhere on their bodies disqualifies them from show-status. Contents Temperament They are smart and lively, but also alert and curious. They are freedom-loving and must have plenty of room to roam and explore. They are best kept indoors or in outside runs for their own safety. Colors and Patterns There are four main Somali colors officially accepted within the United States: ruddy, red, blue, and fawn. European Somali organizations have a different naming convention: “Usual” for ruddy and “sorrel” for red. European Somali clubs also promote various silver colors. Genetic problems In the 1990s, many purebred Somalis had significant dental problems due to congenital problems magnified by inbreeding. As a result, many Somali cats had to have all their adult teeth removed. (Dental abscesses, especially below the gumline, can cause cats to stop eating, which often leads to hepatic lipidosis, a condition that’s often deadly.) As of 2006, the CFA breed standard makes no mention of this, and breeders say they’ve made much progress in breeding out this unfortunate trait.